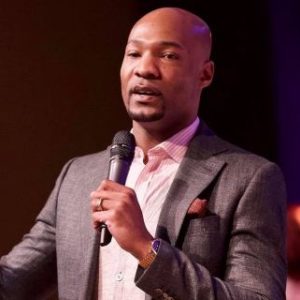 Keion Henderson is best known as a leader, pastor of LightHouse Church, author, entrepreneur, and many more. But, his budding relationship with Shaunie O’Neal made him trending once again on social media in 2021.

Here, we cover details on his father, mother, siblings, and age. Scroll down this Keion Henderson Bio for more!

Keion Henderson was born on 6 July 1981. He turned 40 years old in 2021. According to the precise date of his birth, Keion is a Cancer by zodiac sign.

Talking about height, Keion Henderson stands not more than 5 feet 11 inches (1.80 meters). He keeps a short beard and has a bald head which is his distinct feature.

Keion Henderson was born to his anonymous father in Gary, Indiana, the United States. His parents were Nigerian immigrants. His father was a prominent and affluent leader in the community, who lived five blocks from where he, his siblings, and his mother lived. But, he had allegedly abandoned his family, and the responsibility to look after the kids fell on the lap of his mother.

As Keion stated in an interview with Medium, he grew up in a tough neighborhood that was bullet-and-poverty-ridden. As recalled, the average life expectancy of men in the late ’80s and early ’90s was 25 years old.

Growing up, Keion feared death, as his friend lost his life to a bullet in sixth grade.

Talking about Keion Henderson’s mother Gwendolyn Scott, she worked at Taco Bell for seven dollars an hour. As a hard-working woman and a single mother, she took care of her four kids. As he recalled, his mother raised his four siblings and looked after his mother in a two-bedroom apartment in the east of Chicago.

On Christmas day 2016, Keion gifted his mother an SUV and shared it on his IG. As a caption, he wrote, “This woman has seen to it that every broken place in my life was held together by the adhesive of her love. She worked at Taco Bell making $7 an hour for years to put clothes on our backs, a roof over our heads, and food in our stomachs. My mother has never had much,”

He added further, “And I made her a promise at 17 years old that one day I would be able to erase every memory of every dry season of her life. Now that I’m older I realize that that’s not totally possible, but I am going to do my part. So today I say to you mother, Merry Christmas.”

The Pastor concluded the post with, “For the 9 months you carried me, never missed a basketball game, every play and every graduation you attended. This is a small token of my appreciation to you for giving me life and most of all for giving me a fight. I will love you forever. #MerryChristmas”

Yes, pastor Keion Henderson has three siblings; two biological and one adopted. His siblings are his older brother Terry Brooks, and his sister Keionna Henderson. His one other sibling is yet to be known. Terry is also a Senior Pastor of Bayview Baptist Church in San Diego, California.

In March of 2020, two Henderson brothers came together to have a discussion, and the video was titled When Brothers Meet | Keion Henderson & Terry Brooks Talk. The video was uploaded on the official Facebook page of Lighthouse Church.

No details on the other siblings have surfaced.

Coming to Keion Henderson’s social media, he is on Instagram (@pastorkeion) with a staggering 339k followers with a verified account. He made a total of 10.8k posts on the platform. Likewise, his Twitter account (@PastorKeion) is also verified with 22.5k followers. He made over 23.5k tweets as of early July 2021.

Keion Henderson is estimated to have a total net worth of over $1 million.

Before attending college, Keion Henderson enrolled at Central High School in East Chicago, Indiana. After graduation, he attended Indiana University-Purdue University at Fort Wayne. He graduated from the university in 2004 with a bachelor’s degree in interpersonal communications. Two years later, he joined Faith Evangelical College & Seminary and earned his Master of Theology in 2008.

In January of 2008, Keion became the CEO of Tax Solutions and has been working there ever since. Furthermore, he became the pastor/founder of The LightHouse Church and has been doing god’s work starting from October of 2011.

Keion has dedicated more than 20 years of his life to active ministry. He also authored a book titled THE SHIFT: Courageously Moving From Season to Season which inspired people of all backgrounds to face life’s challenging stages with tools, courage, and purpose.

On top of that, Keion is also the founder of Abbey Daycare.

The pastor was also recognized as a CNN Heroes Award nominee in 2016, helming disaster-aid initiatives both locally and internationally. He has also been recognized by The John Maxwell Institute as one of the Top 250 Leaders in the nation, and he was nominated in 2019 for a Stellar Award, for Traditional CD of the Year for his breakthrough album, “The River.”

Keion Henderson And Shaunie O’Neal: Dating, How Did They Meet?

The story behind how Keion Henderson and Shaunie O’Neal met each other is yet to be revealed. Both of the involved have kept their lips sealed on that matter. However, Shaunie hinted at the blossoming relationship on social media by wishing Keion on his 40th birthday.

“Today many will celebrate you for the impact that you have made in their lives, the love you’ve shown to perfect strangers, and the comfort you’ve provided sharing the word of God,” Shaunie wrote a lengthy post.

“Today I celebrate you because as our friendship has blossomed, you’ve become my safe place where I can authentically grow without judgment. You are my soundboard, you’ve taught me so much thus far, and you love me and my children unconditionally,” she continued.

She concluded the post with, “During a time where I had given up on finding a soulmate, God sent you. Thank you for being my friend first, yet being intentional with my time and heart. Happiest Birthday to the man that has made.” 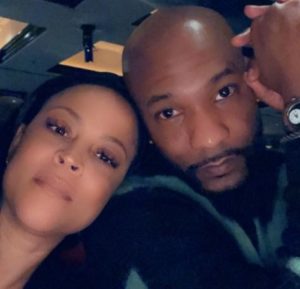 Keion and his new lover Shauni together in July of 2021 (Pic: Keion’s FB)

The love between Keion and Shaunie has just been confirmed but they were snapped together back in 2019. Before Keion, she dated Marlon Yates who she met after her divorce with former NBA star Shaquille O’Neal.

Who Is Keion Henderson Ex-Wife?

As for Keion Henderson, he was previously married to Felecia Annette Henderson who is known as the first lady of the LightHouse Church. His ex-wife, Felecia was also a part of an online talk show Closet Chats.

After Keion and Felecia married on 7 August 2010 they stayed together for 9 years ending their marriage with a divorce in 2019. The pastor had shared about the marriage trouble several times before and divorce was announced on BlessedBeatz Media in an interview.

Together Keion and his ex-wife, Felicia had one daughter; Katelyn who was born on 18 July 2012. Whereas, Felicia has other two daughters; Tynisha Marcel (born 20 July 1995) and Candis Clements (23 December 2005) were from her previous relationships.

Tynisha married on 17 May 2021 and became Tynisha Thomas. Candis is a track-and-field athlete.