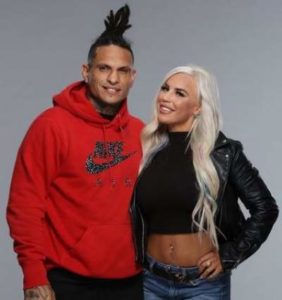 WWE Women’s Wrestler Dana Brooke got engaged to her “life, love and forever”, Ulysses Diaz in 2021.

After her recent well-documented but failed romances with Dolph Ziggler and Batista, Dana announced she is engaged to be married to her boyfriend Ulysses Diaz. So who is Ulysses?

Find out in this Ulysses Diaz Wiki.

On July 6, 2021, Dana Brooke (real name Ashley Mae Sebera) took to her Instagram @ashasebera_danabrooke to share — “There is no LOVE that feels like yours… I would say YESSSS over & over again!! Love you today, tomorrow & forever!! I AM ENGAGED” — with her 1.2 million followers.

But, because the newly fiancé did a similar declaration on social media a day before, it seemed the two got engaged on July 5, 2021.

Meanwhile, about the wedding, Dana hinted they were planning for one as she used the hashtags ‘bride to be’, ‘wedding planning’, and ‘husband and wife’ on her engagement announcement post.

Ulysses Diaz reached 40 years of age on March 14, 2021. On the day, Dana composed a loving public message for her “soulmate.” She called him a true warrior, the most incredible, special, and loving person she has ever met in her life. And that she is beyond blessed to spend every day with him.

Ulysses Diaz, who grew up idolizing rapper Pitbull, was born in Cuba. However, his parents seemed to have moved the family to Miami, Florida, in the United States very early on. Because, we know, Ulysses was brought up in his hometown of Miami.

Ulysses has a sister named Aryana Diaz, his mother Mercedes Deborah Reyes, and father Javier Sopena, in the family. Word has it, Javier is Ulysses’s step-dad.

As a fitness fanatic, he loved helping others develop their fighting skills at the gym or likewise scene.

Ulysses Diaz had less than an estimated $800 thousand net worth before 2021.

He is a professional boxer who had been helping Dana, his (American) professional wrestler, bodybuilder, gymnast, fitness competitor, and model beau to train.

Affiliated with the Bare Knuckles League, his career’s unusual story started when he was 35, an age where many fighters choose to retire. Yet his love for boxing developed when he was only 6. This was the outcome of growing up under the influence of his Cuban family members who loved to box.

However, Ulysses always found himself in trouble for fighting. For instance, when he was 20 and had decided to sign up for a four-year coast guard position, he was discharged eleven months later as a result of more trouble with fighting. At 23, he even spent two and a half years in prison after he got into more serious trouble with fighting.

Anyway, eventually, Ulysses also found some good kind of fame for the likes of breaking the world record for the fastest Knock Out in history in three seconds against Donelei Benedetto.

Ulysses prefers fighting for hunger causes and played his first fight in the Dominican Republic.

Further, other than his MMA jobs, he also currently (2021) worked as the Head of Security at Cash Dome.

Even at the time of this writing, Ulysses Diaz did not seem to have time to update his relationship status on Facebook; which read he still is married to Tirza Diaz (his ex-wife).

Tirza, a Cannabis chef, and entrepreneur, also happens to be Ulysses’s baby mama. Together, the exes share a young son, Uly JR, who has an Instagram page of his own @67ulyjr_beast; and is ran by his “mommy and daddy.” 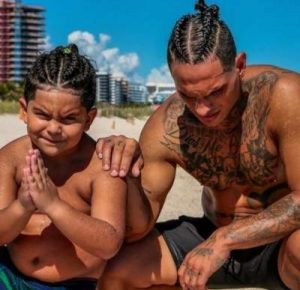 While Dana, who began dating Ulysses at the end of 2019, was also once in a relationship with Dallas McCarver before the weightlifter passed away back in 2017.