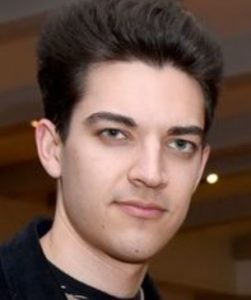 Olivia Rodrigo has won millions of hearts as a singer-songwriter and as Nini Salazar-Roberts in Disney+ series The High School Musical: The Musical: The series. Her song Drivers License was a huge hit and touched the hearts of millions of people. But by 2021, Olivia seemed to be focused on winning one particular heart, of one Adam Faze.

According to Page Six, “the couple stepped out together at the Space Jam: A New Legacy premiere party at Six Flags Magic Mountain in California last week.” The Space Jam party was on June 29, 2021. And apparently, Olivia introduced Adam as her boyfriend at the party.

Read more about Adam and his new budding relationship with Olivia below. Also find out his age, height, net worth, etc over this Adam Faze wiki!

There was not much information about Adam’s family. We only know that he was born in the United States and thus his nationality is American. Other than that, there was no mention of his hometown.

On the other hand, there was quite a lot of information about Olivia’s family. Apparently, her family was primarily American with Filipino heritage. Her paternal grandfather originally came from the Phillippines. The Rodrigo family still preserves their Filipino roots by cooking traditional Filipino food in the family.

Adam Faze was apparently over 6 ft in height. Compared to him, Olivia Rodrigo was about 5 ft 4 inches in height. Adam’s other distinct features include his dark hair, which he kept short, and his bright blue eyes.

Adam was present on multiple social media platforms but was not very active and did not have too large of a following, at least it was nothing compared to Olivia’s social media following.

He also had a Vimeo profile and had over 20 followers over there.

Adam Faze is an up-and-coming Hollywood producer with a little writing and directing credit as well. He started his career in Hollywood as an assistant director for a 2017 video short called Don’t Mind Alice. After that, there were no immediate breakthroughs for him.

It was only in 2020 that Adam found success all around. He made his debut as a producer, director, as well as a writer, all in the same year. His first video short, as a producer and director, was called Love in the Underground: Side B. He also made his writing debut with the TV series Day by Day. He also produced that series.

His other directorial credits include Goody Grace feat. G-Eazy & Juicy J: Nothing Good, also in 2020. And his other credits as a producer include a movie short called How Moving (2021). Also, he had a couple of movies, which he has produced, that are yet to come out in 2021, River Fork and Who Am I?

Adam was also a former contributor at Forbes. He is the co-founder of Chateau Savant, “an event series that launched this year during the Cannes Film Festival (May 18-26, 2017)”. Together with his friend Jamie Dolan, Adam runs a production company called Must B Nice. He was represented by Brillstein Entertainment Partners and Ziffren Brittenham LLP.

Adam Faze And Olivia Rodrigo: Dating, How Did They Meet?

When the couple was first spotted on Space Jam: A New Legacy premiere party, everyone seemed to have taken notice. People who were attending the party seemed to be pleasantly surprised by the relationship.

One source, who was in the party, seemed to have said “They were really cute together and weren’t trying to hide their affection at all.” Stuart Brazell in particular had said that the two of them were “really cute, but not too overly touchy.” She further added, “The two of them together felt comfortable and newish…It just felt like comfortable, cuddly, new young love.”

Obviously, not everyone was on board with Olivia and Adam’s relationship. Some fans seemed to be a little concerned about the age difference between the two of them. Olivia was only 18 years of age and Adam was 24.

However, to Olivia and Adam that did not seem to matter. They already seemed to be getting really serious although the relationship was only a few months old. E! found out that “Faze and Rodrigo secretly started dating weeks before their Space Jam 2 outing.” They celebrated the 4th of July holiday weekend together. They also follow each other on Instagram. They apparently met through “industry friends”.