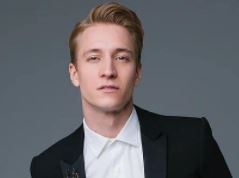 Just a month after her split from her 14-years-long husband Gleb Savchenko, DTWS star Elena Samodanova was spotted with a man named Vlad Kvartin on a beach in Cabo San Lucas, Mexico.

The duo was pictured sharing a passionate kiss as they both held drinks in their hands. Moreover, the pair looked comfortable with each other in arms, bathing under the sun.

So, who is this new man in Elena Samodanova’s life? Get to know all about him over this wiki.

Vlad Kvartin was born on August 31, 1995. That made him 25 years of age in 2020; eleven years younger than his girlfriend Elena Samodanova.

As per his birthday, Vlad is of the Virgo zodiac.

Vlad Kvartin is of Russian nationality, born and raised in Bratsk, Russia.

He shared that he grew up with his 5-year-older brother named Ilya Kvartin; “hoping fences, climbing roofs and being the hooligans that we were”. And now the siblings were all grown up, Vlad recalled that his brother did a “tremendous amount” of things for him. Wiping his back, taking punches for him, overall making his life easier, big bro Ilya was always there for Vlad.

Furthermore, Vlad labeled Ilya as his “best friend” and “homie since day one”. He added, Ilya “has always been an inspiration to me and my family.”

Little info about Ilya: He is a BU Henry M. Goldman School of Dental Medicine – Continuing Education graduate. Apart from being a dentist, Ilya was also a guitarist.

As for Vlad’s parents, they were married for over 27 years. Vlad thanked them for “all that ass whopping” he received because it built him into the man he is today.

Mentioning his distinct features, Vlad is a handsome man with blond hair and green eyes.

Also, he was found over Facebook but had “following” turned off.

Like Elena, Vlad is also a dancer who appeared on Dancing with the Stars 2020. Also, he participated in So You Think You Can Dance season 16, and stood amongst the top 20. We might be seeing him in future dance competitions as well.

Furthermore, Vlad is a Choreographer/Teacher who worked with dance studios like Pro Dance L.A. and Dance With Me Glen Rock.

Apart from being a dancer, Vlad is also an aspiring model. Find pictures of him featured on different agencies including Major Models, New York.

In light of his education, Vlad graduated from Fair Lawn High School in 2013. Soon after, he joined a four-year course of Business Administration – Finance at Montclair State University.

Vlad Kvartin & Elena Samodanova: Dating, How Did They Meet?

Vlad Kvartin and Elena Samodanova started dating just around Christmas 2020. Though they were caught on camera sharing a romantic time, the duo refused to talk about their relationship then. So, it’s not exactly clear when they first met.

As for the fans commenting about Elena finding Vlad within a month of her split from her husband Gleb Savchenko, it was only fair that she should find someone too as Gleb was already dating Cassie Scerbo.

Coincidentally, ex husband-wife Elena and Gleb vacationed with their “new lovers” at the same place, Cabo, a week apart.

If you don’t know, the DTWS stars, Elena and Gleb filed for divorce in Dec 2020. They share two kids named Olivia and Zlata. As for the reason for their split, Elena claimed that Gleb had “multiple affairs” while they were still married. To which, Gleb completely denied the claims.

Info about Vlad’s girlfriend: Elena participated in DWTS in many countries like Australia, US and was the judge for DWTS Russia. She comes from a family of dancers and even married the dance star Gleb Savchenko in 2006