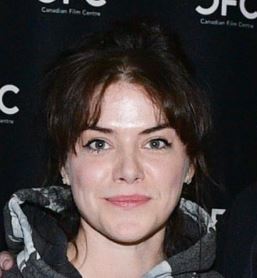 If you are a fan, this article about Kaniehtiio Horn is a must-read. Find out who is the new addition to the show. Learn about her partner, her married/single life, and interesting wikis like height, net worth, etc.

Reservation Dogs is a show about four teenage indigenous kids, living in rural Oklahoma, within the native American reservation. The show was created by Taika Waititi and Sterlin Harjo.

And Kaniehtiio Horn plays the character of the Deer Lady. In the fifth episode of the show, the audience comes to know that Officer Big (one of the major characters) met the Deer Lady during his youth and learned an important life lesson from her.

Kaniehtiio Horn was born on 8 November 1986. Meaning, she was 34 years of age on 31 August 2021, i.e. the day this article was published. Also, because of her 8th November birthday, her zodiac sign was Scorpio.

Yes, Kaniehtiio is a native American from her mother’s side. Her mother, Kahn-Tineta Horn, is a Mohawk (an Iroquoian-speaking tribe)  fashion model and political activist. Kaniehtiio also has Scottish, German, and English roots from her father’s side.

Kaniehtiio has six older sisters, including Waneek Horn-Miller, a Canadian water polo player, Kahente Horn-Miller, and Ojistah Horn, who got married in September 2018. Waneek was the second Mohawk woman to compete in Olympics for Canada.

Kaniehtiio was born in Ottawa, Ontario, Canada, and grew up moving back and forth between her native American reserve (where her mother was) and Ottawa (where her father lived). Her full name was Kaniehtiio Alexandra Jessie Horn Batt.

In 2020, Kaniehtiio posted a video on her Twitter teaching people to pronounce her name. And in that video Kaniehtiio says that her name was pronounced as Ka-nieh-ti-io.

Kaniehtiio Horn is a very tall woman and stands at a height of 5 ft 10 inches.

Kaniehtiio is an actress with 70 acting credits so far. She made her acting debut in 2004 with a movie short called Might of the Starchaser. Her Television debut came two years later in a TV mini-series called Indian Summer: The Oka Crisis.

In her 16-year acting career, her major TV shows are 18 to Life, Defiance, Hemlock Grove, Blank Paige, Letterkenny, Ghost BFF, etc. In Reservation Dogs, she only had a minor role for a single episode. Her major movies are Immortals, On the Road, Death Wish and The Hummingbird Project, etc.

Kaniehtiio studied acting at Dawson College’s Professional Theatre Program and graduated in 2005. As of August 2021, she had earned a net worth of $2 million.

Did Kaniehtiio Horn Have A Baby?

So, who is the father of the baby? Keep Reading to find out.

Kaniehtiio Horn Partner: Is She Married Or Dating?

The best answer we can give right now (2021) is that Kaniehtiio Horn did not appear to be married. 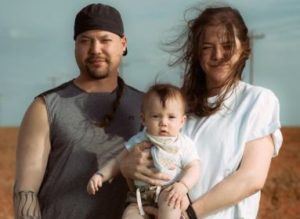 Kaniehtiio Horn with her baby and the father of her baby circa May 2021 (PC: Kaniehtiio’s IG)

As of 2021, we are also not sure if Kaniehtiio and her baby’s father were still romantic partners or just partners in parenthood.

Back in 2019, there was a rumor that she was dating a guy called Bradley LaRocque. There was a single piece of evidence in favor of the rumor, Valentine’s day post on her Instagram in 2019. Comparing Bradley’s photos with Kaniehtiio’s baby father’s photos, it does not look like they are the same person.

According to his Facebook, Bradley is an “Artist, writer, gardener, wanderer, wonderer, warrior nerd.”

While we are still in Kaniehtiio’s dating life, there were a series of random seemingly meaningless Tweets about her boyfriend back in 2013. However, she never revealed the name of the said boyfriend.

One Reply to “Kaniehtiio Horn Partner, Married, Height, Net Worth”