Bachelor in Paradise‘s alum Jenna Cooper is no longer a bachelorette.

While Jenna (turned 32 on June 9, 2021) is already pretty popular as the Bachelor and Bachelor in Paradise contestant, here’s all you need to know about her fiancé over this Karl Hudson IV wiki!

Karl Hudson IV is a Virgo who celebrates his birthday every year in Sep. 21st. He, therefore, reached the age of 34 in 2020.

It looks like his parents are no longer together. His mom is Donna Godwin Hunter and has a brother, Trevor Godwin Hudson.

Back in 1915, Karls’s great grandfather (who passed away in 1953) started a joint venture with America’s richest Belk family (with an estimated $2 billion net worth) in downtown Raleigh, N.C., and named it a Hudson Belk. Later, Karl’s father succeeded the business from his father Karl Hudson Jr. (who lived until 2006).

So, Karl’s dad started his career at Belk in 1978, served in a number of merchandising and management positions in the Hudson Belk division office, at the Savannah Belk stores, and the former Belk Stores Services Inc. offices in New York until he resigned in 2000. At the time it was not revealed who was going to succeed him. Was it his son Karl? We don’t know yet.

Karl Hudson IV stands tall above 6′ slightly towering over his soon-to-be wife Jenna Cooper who is 5’7”.

Karl Hudson IV, who Jenna claims to be the man behind her camera, could be spotted on Facebook. He also owned an Instagram account but had turned its private mode on. On its bio, he introduced himself as “El Padre de” (translated as the father of) Presley Belle and Princess Pearl, and Jenna’s partner in crime. Princess pearl here happens to be, his family’s beloved pet pig.

Karl also makes regular appearances on Jenna’s Instagram. Jenna, as you already know, is a popular fitness Instagrammer. She is also adored for her amazing sense of humor.

He is a licensed and commercial real estate broker practicing his expertise in North Carolina, South Carolina, and Georgia. Back in 2011, he got his Commercial Real Estate Investment certification from CCIM Institute.

Furthermore, Karl is a partner at Foundry Commercial where he leads the land services team and has transacted over 6,800 acres of land so far.

Karl grew up in Raleigh, North Carolina. In a city known for its universities, the Broughton High School grad attended the University of South Carolina in Columbia. There, he double majored and earned a Bachelor of Science degree in Real Estate and Marketing.

Before Jenna Cooper showed off her massive engagement ring to the world in June 2021, she had publicly confirmed her romance with Karl in January 2020. She had done it through Instagram when she revealed she met Karl one year prior. Also, she made it clear to her fans that she can not imagine her life without him.

Then, when not even a soul was anticipating anything, just a few days later, Jenna announced on Instagram that she was expecting her first child with Karl.

PEOPLE then exclusively unveiled in May 2020 that the couple had welcomed their daughter, Presley Belle.

From the looks of it, Karl was waiting for Presley to come into their lives, and grow up to witness him proposing to Jenna. Oh yes, the baby girl was right there in her when Karl went down on one knee. 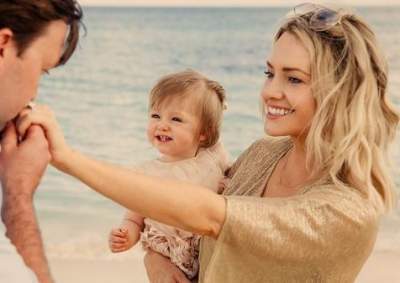 At the of this writing, Karl’s dating life and relationships before Jenna was a mystery to the world. But, everyone especially Jenna’s followers is aware of how Jenna met, fell in love with, and got engaged to Jordan Kimball on Bachelor in Paradise. Then, following infidelity allegations, Jordan had called her engagement off one day after their proposal footage aired on the ABC series.

Back then, a story on blog Reality Steve alleging Jenna cheating on Jordan with an unidentified man had gone viral on news channels. Jenna had then tried in all her might to prove she did not cheat on Jordan. But Jordan anyway drifted away from the Indiana native.