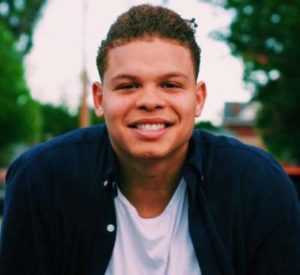 He announced he is going to film for the new season of the MTV show. Thus fans wanted to know more about Justin who has also appeared in Leah’s recent social media posts, including a TikTok video that went viral.

So, the Justin Burke Wiki below is just that.

Justin Burke Family, Is He Adopted?

Justin Burke loves spending time with his friends and family.

His mother Janet Farley Burke and father Paul Burke have been married for more than 40 years.

“Happy 68th Birthday to my honey !!! Our family is blessed to have such an amazing man who has the biggest, caring heart. Your ways stand out among others because you care so much. I’ve watched you love your family, be there for your friends, neighbors and community and give in ways that others may not of noticed, but I did.”

Justin was adopted by his parents when he was two. On his social media, Justin has opened up how his “so brave with a heart of gold” mother’s dream of having her own son came true after she adopted him.

He thanked her for providing him a roof overhead with entertainment and all the food and safety and all that he needed when he was young.

Justin is also beyond grateful for sister Sarah Burke Olish. He gushed how she supported him through every decision of his and became his role model. The “beautiful, intelligent, and goal-oriented” big sister studied at the University of Charleston and went to Riverside High School. And she continued to live in Charleston, West Virginia just like Justin and the rest of the family members.

What Is Justin Burke Ethnicity?

Justin Burke appears to be of mixed ethnicity.

Back in September 2020, he took to his Facebook to share a comparative picture of him at 180lbs and 155lbs asking his friends on Facebook — “What difference will you make today personally to become a healthier you?”

His social media sharing suggests he is concerned about his fitness and attaining a healthy lifestyle.

Until August 17, 2021, Justin Burke had 6,986 followers on his Instagram @thejburkeproject.

Then, one may also find Justin on Pinterest @thejburkeproject8217, Venmo, on his YouTube channel ‘The JBurke Project’.

Justin Burke is a business owner and photographer who had over $200K net worth by August 2021.

He goes around by ‘JBurke’, the founder of JBurke Media LLC, full-time producer, content creator, and videographer.

JBurke Media, which is a domestic profit company, was incorporated late in Nov. 2020 in West Virginia.

Then, LinkedIn also mentioned him working as a full-time logistics account executive at Total Quality Logistics from Jan. 2018 – Apr. 2020.

Academically, he is a Molecular Biology/Chemistry graduate from Marshall University (2013 – 2017).

Just so you know, someone like Justin working as a photographer in Charleston-Huntington Area made an average of $15.84 per hour.

Justin Burke And Leah Messer: Dating, How Did They Meet?

So while fans have been hopeful that Justin Burke would appear in season 11 of Teen Mom 2, Leah Messer denied the rumors that she and Justin were dating. “I wish but no I don’t have a boyfriend,” she said on TikTok but when another follower responded Justin was handsome, Leah agreed to it saying, “He’s cute”.

“I am not dating Justin Burke. We are just friends. He helped me create content and work with the camera and all that kind of fun stuff.”

Leah first appeared on 16 and Pregnant in 2009 and joined Teen Mom 2 when she was 17. The teen mom shares two daughters — 11-year-old twins Ali and Aleeah, with ex-husband Corey Simms and a third daughter, 8-year-old Addie, with second husband Jeremy Calvert.

The West Virginia native also cared to share what she wanted in her ideal partner — someone who had a good sense of humor, likes going on adventures and is compassionate.

So, as Leah dodged the rumors about dating Justin, she also clarified she is not interested in getting back with her exes. “I’m just totally focused on them and really leveling up in my career,” said Leah who also however hopes to find a special person along the way.