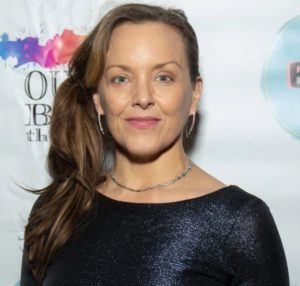 Tony-award-winning Broadway actress Alice Ripley was accused by a TikTok user that she was groomed. The TikTok video garnered over 1.3 million views as of 17 Aug 2021. Since she made the headline, let’s learn more about the actress.

Alice Ripley, who had built a reputation as a Broadway legend, has fallen under controversy after an underaged female fan accused Alice of “grooming” her. She told Page Six, that the accusations which were made online against her had no validity at all. Alice thanked everyone for their continuous support.

The actress denied the accusation four days after TikTok user @lovelyleobrie (real name Brie Lynn) claimed about grooming her. She uploaded at least six photos of her and Alice on display on her TikTok.

Brie made accusations such as “Our first conversation was about a photo of you in lingerie,” “I was TWELVE & when I was THIRTEEN you told me that the first time we locked eyes you felt like the world stopped.” She also claimed that one of Alice’s “insane fans” even tried to kill her.

The TikToker also shared that she tried to convince herself that it didn’t happen but it did. Brie also accused her that, Alice separated her from all of her friends and made her hate Broadway which she loved once.

Alice Ripley was born in northern California. She grew up “all over Ohio” which she usually hesitates to share publicly. Coming from a blended family, she had 10 siblings, and she was a middle child. Her biological parents got divorced.

Her father passed away suffering from Alzheimer’s disease. And, most of her siblings and step-siblings still live in Lakewood near Cleveland so she often visits the place to go see them. She is also close to her step-mom, Jo Ann Ripley who resides in Springboro.

Two known siblings of Alice are her brothers Dan Ripley and Scott Ripley.

On Instagram, Alice Ripley went by the name (@ripleytheband). The platform garnered her 7262 followers as of Aug 2021. However, her latest controversy made her to private her Instagram.

Similarly, Alice can also be discovered on Twitter with the handle (@ripleytheband). In there, she had 17.8k followers and she tweeted 13.6k times on the platform.

There also exists a Facebook page based on her with 3,951 followers.

Alice Ripley knew she wanted to become an actor from an early age. She was 10 when someone asked her for the first time what she wanted to become when she grew up to which she replied an actor. She discovered her love of theater at the age of 12 or 13 in Cleveland when she played a monkey in the “Wizard of Oz.”

It was only when she turned 20 years old, she saw her first broadway and met professional actors.

Even before enrolling at West Carrollton High School, she had already built a reputation for herself. Her brother Scott and her stepsister had joined the high school before she had warned everyone about her.

With confidence, Scott had shared that Alice was going to get a part in a musical so he wanted everyone to be ready for that.

Alice earned her BFA degree in musical theater from Kent State University in 1985. Before she moved to New York for her Broadway career, she worked in summer stock. She briefly lived in San Diego where she earned her Equity card, and also worked at Old Globe, La Jolla, San Diego Rep, and a couple of others comedy theaters.

Then, she moved to New York and got Tommy then Sunset Boulevard for two and a half years. Other critically acclaimed works of Alice included The Dead, Les Miserables, and Side Show. She also created the roles of Mrs. Bateman/Mrs. Wolfe was part of the original Broadway cast of “American Psycho” in 2016.

One of the reasons that she could easily land roles in a theater was because of her singing ability. She recorded two albums Unsuspecting Hearts and Duets. Even if she hadn’t left her hometown, she would have pursued a career as a ‘vocal teacher’ in her hometown, according to her interview with Theater Mania.

Alice Ripley bagged her first Tony in 2009 for her work in Next to Normal, a Pulitzer Prize-winning rock musical. Beyond Broadway, she also starred in Netflix’s Girlboss, a comedy series.

Talking about marital life, Alice was married at least three times in her whole life. After earning her BFA degree, she first married a Navy man and settled in San Diego. Then, she left her first husband and lived in Nashville while on her way to New York. It was when she started writing too.

Besides that, no information surfaced regarding Alice Ripley’s first husband.

Alice Ripley met her second husband Shannon Ford in the 1990s. The couple tied the knots eventually in 1995. They were married for at least 13 years. It was after moving to Nashville, where she met her drummer ex-husband Shannon Ford.

There exists no information on their wedding and having kids together.

Shannon Ford worked alongside his ex-wife Alice living theater life behind a drum set at Signature Theatre. He was born and raised in Davidsonville, Maryland. He got the opportunity to play with the Jazz greats such as Clark Terry, Urbie Green, and Mundell Lowe.

The Lesbian allegations haven’t been confirmed yet. But, the fact that Alice Ripley tried grooming a girl says a lot about her sexuality even if she never confirmed it openly.