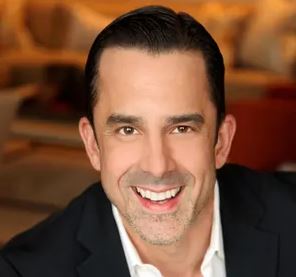 Yet another home-makeover series is on its way. Spicing up the genre, this time the makers have decided to put its audience in the spirit of the holiday season.

Holiday Home Makeover with Mr. Christmas is the name of the series that is set for its release on Netflix on 18 November 2020.

And, in the writing below is a detailed wiki about the show’s host, interior designer and executive producer Benjamin Bradley, who has landed the nickname “Mr. Christmas” for his “healthy obsession” with the Christmas decors, everywhere he goes.

Benjamin Bradley, whose heritage is partly German, was born in the mid-1970s. So we figured, he turned somewhere near 45 years of age in 2020. But we knew nothing of his birthday and zodiac sign.

Benjamin Bradley was born and raised in the hometown of Boonville, Indiana.

He graduated from Boonville High School and attended studied at Purdue University, and moved to New York 27 years ago.

While both his family, both his parents and two sisters and their children remained in Boonville and Evansville. 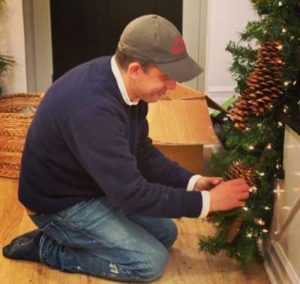 Christmas, for Benjamin always has been more than just some festive. Even as a little boy, he remembers dragging a dead Christmas tree back to the house. “I guess I was going to decorate it and do the whole thing all over again. So that’s a big part of who I am”, he shared one of his early life memories.

Benjamin Bradley stands to a height of 5 feet and 9 inches. Also, sometime before, his weight was listed under 75 Kg.

Fans rarely saw him on online platforms and TV. And now that he is going to be the household name and face, they are super excited.

Maybe then, they will be able to tell his fashion and style. Thus far, we did not see find him close enough and clear even on his own social media.

Benjamin Bradley is on Instagram with less than a thousand followers. The site includes mostly the pictures of the holiday makeover Benjamin and his team gave to their clients.

While on Facebook, he had little over one thousand friends. And, until 11th November in 2020, we did not find him on Twitter.

Benjamin Bradley came to New York to complete his bachelor’s degree at the Fashion Institute of Technology. From there, he graduated in Interior Design with Honors.

After classes, he haunted the city’s flea markets, auctions, and antique shops, enhancing the collection he had begun in Indiana. Years later, and his collection exceeds 3,000.

Before his current job came into the picture, Bradley was a partner, co-founder, and designer of Bradley Thiergartner Interiors for over 19 years. In 2013, he left a successful partnership with the company and established E&Co. Home.

This way, over the course, the boutique and full-service interior design firm owner Benjamin Bradley reportedly pulled in over $3 million net worth.

In each of the four episodes of Holiday Home Makeovers With Mr. Christmas, airing this fall, Bradley and crew go to a home and meet the family there, and with a two-day deadline, give the home an all-out Christmas makeover.

Benjamin said the idea of the show came about two years ago when a friend pitched the idea to him. And because of a promise he had made to himself, Bradley wasn’t in a position to say no. He explained this was the year, he had decided that he was going to have a year of saying ‘yes’. “I was just going to say ‘yes’ to any opportunity that came my way and see what happened.”

Circa December 2018, we got to know Benjamin Bradley shared a six-room, prewar Carnegie Hill home with his life partner, Bruce Wayne, who happens to be a celebrity makeup artist.

Also, in the home, the gay couple had Ebenezer, their pride and joy, a dog, who is part black Labrador, and a part pit bull.

At the time of this writing, they were not married.

Judging from the fact that Benjamin is has a male as a partner, people his sexual orientation is termed ‘gay.’

In the meantime, we could tell more about Benjamin’s partner Bruce had he been on Instagram. Two decades ago, he moved to New York wanting to become a celebrity makeup artist.

Quickly, he found himself living the dream. He got to serve the most famous names in the town including, Miley Cirus, Venessa Hudgens, Kelly Ripa, Paris Hilton, Kristin Chenoweth, Kate Mara, Katherine Heigl, Lisa Kudrow amongst the many more.

Also, his work got featured in the best of the platforms i.e. to name the few– InStyle, ELLE, Teen Vogue, Vanity Fair, Esquire, and GQ.

Sometime in 2017, actress-singer Vanessa Hudgens mentioned and credited Bruce, in an Instagram post. The caption to which read: “When your makeup artist loves glitter just as much as you do #brucewayne (he doesn’t have an Instagram 🙄”.