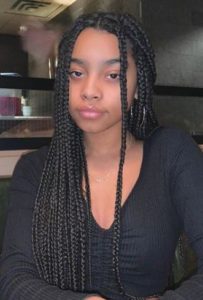 The role of Natasha Mann in TV sitcom Mann and Wife (2015) brought Jadah Marie all the fame she could wish for. She played daughter to Toni Mann, portrayed by American gospel singer and actress, Tamela Mann.

This article brings you the life of the young actress and her way into the entertainment industry. Know about Jadah Marie parents & siblings by reading along!

Who Are Jadah Marie Parents & Siblings?

From her dad, Jadah inherited Guatemalan and African-American genes. The ethnicity she garnered from her mom, however, eluded everyone.

“From taking me to classes, auditions, meet and greets, to get my hair done, sports, just everything. To see how he hustles, makes deals for my music and my career, finding the best people to surround me with and protecting me against bad energy. I just love him for that and love both my parents for all the love and support. They are my biggest cheerleaders.”

Being the youngest in the family, Jadah was raised receiving the love and care of 8 older siblings and her parents.

Jadah also has twin brothers named Amir O’Neil and Amari O’Neil. Both brothers chose the career path laid out by her father.

Amir is best known for the role of Zack on the NBC sitcom Marlon (2017) and Darren Mann along with Jadah in Mann and Wife (2015).

Whereas Amari gained prominence through his roles in several episodes of Training Day (2017) and, David Flebotte created comedy-drama I’m Dying Up Here (2017).

How Much Jadah Marie Net Worth?

With Jadah’s twin brothers already knee-deep in the entertainment industry, her father and her brothers guided her through, to set her acting career in motion.

Moreover, she appeared in Ready Player One (2018) and got major attention with the 2019 TV movie Descendants 3 where she played Cilia Facilier, a feisty and sassy daughter of Dr. Facilier.

Jadah also starred in the sci-fi series Home Invasion and Calvin J Walker directed short film No Safe Place which was undergoing filming at the time this article was written.

In September 2020, Netflix premiered a new series titled Julie and the Phantoms starring Jadah and her co-stars.

Similarly, Jadah, who describes herself as funny, unique, and fashionista, has beautiful curly-coiled, black hair.

Sami Gayle is the American actress of theatre and screen who gained fame with her role as Nicky Reagan in...