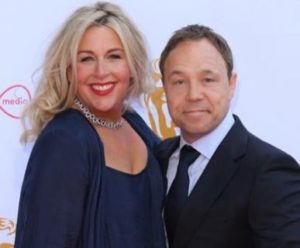 Only a few married actors are lucky enough to portray each other’s spouses over Television. Well, Stephen Graham and his wife, Hannah Walters were one of them, featured in the BBC series Time.

This Hannah Walters Wikipedia features all you need to know about Stephen Graham’s on/off-screen wife.

The show’s director, Lewis Arnold mentioned that Hannah didn’t land the role just because she was Stephen’s wife. “Hannah has all the credit. Hannah auditioned for the part like everybody else and she was phenomenal,” he shared.

As for Hannah’s take on landing the role, she believed that whoever played Sonia, needed to be “super, super natural and real in the parts.” So, who better than her?

Also, Hannah let us in on the secret that she read every script before Stephen did. And soon as she read it, she would be “just blown away” and couldn’t stop reading it all. “I didn’t for one moment see myself as Sonia,” she added.

She receives her birthday wishes on January 19; especially from Stephen who often took it to his socials to wish her. The last we saw him wish was in 2016, where he uploaded a pic of them captioned, “Happy birthday princess. Xx.”

As per her birth date, Hannah is of the Capricorn zodiac.

Hannah Walters is from Leicestershire, a landlocked county in the English Midlands. While her husband, Stephen Graham was born far northwest from her birthplace, in Kirkby, Merseyside.

Though not much was known about Hannah’s family, we’ve associated a few news related to her — Nikki Jo Walters, Maia Walters, and Caitlin Walters.

Hannah Walters stands tall at a height of 5 feet 5 inches. If you have noticed, she is only a little taller than her husband Stephen who is 5 feet 4 ¾ inches.

Together, they look like the couple made for each other, literally.

As of June 2021, Hannah entertained 21K followers over Instagram @waltersgraham, and 13.1K followers over Twitter @HannahWalters74. Her posts then were filled with pictures of her family; especially Stephen, and only a few of herself.

You might have already guessed, but yes, Hannah wasn’t as popular as Stephen in the show biz. In 2021, Stephen had over 100 movies and TV shows entitled to his name, while Hanna only had 21. Mentioning some of her popular are:

Hannah Walters first met her future husband Stephen Graham back when they were still students at Rose Bruford College of Speech and Drama in London. They were already in a relationship before 1995 and went on to get married over a decade later on June 6, 2008.

Coincidentally, on the day of writing this article (June 6, 2021), Hannah and Stephen celebrated their 13 wedding anniversary. As for the secret to the longevity of their marriage, Stephen shared that they were “bezzie mates” long before they tied the knot.

So, unlike the start of a normal relationship, they just one day decided, “This is daft, do you know what I mean? We like each other, we should get together.”

Trivia: Grace is a talented singer, and we’re just not saying it. Someday, we’re sure to see her on bigger platforms.

In 2021, the Walters family were living in Ibstock, a small village near Coalville. Before that, they have resided in London and Rome as well.

Little info about Stephen: He is an actor popular for his roles in movies like Snatch (2000), Coronation Street (2006), and The Irishman (2019). Unfortunately, he suffers from dyslexia, but Hannah was always there to help pick his roles.