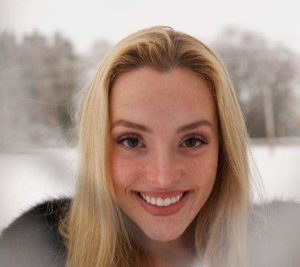 Meet Grace Kinstler, who for the first time in four years of American Idol journey, left judge Luke Bryan in tears with her very powerful performance.

And naturally, people wanted to know more about her, her family background, relationship status, and all.

Born as a Leo, Grace Kinstler celebrates her birthday every year on the 4th of August. In 2020, she reached the age of 20.

Before her breathtaking performance on the American Idol stage, Grace shared the story of unexpectedly losing her father a year before.

So, Grace Kinstler’s dad Mitchell Ian Kinstler passed away at the age of 64 on Feb. 5, 2020. Mitchell and his wife (and Grace’s mom) Sherry were married for nearly 30 years. He was also survived by his kids and Grace’s siblings— Kristina, Jacob (Lauren), Jordan, Grace Kinstler, and Tyler (Morgan) Johnson.

Before the audition, Grace told the American Idol host Ryan Seacrest that her dad was her biggest cheerleader, and that she used to watch the show with her mom and dad.

The void that the early demise of her dad left is never going to be filled but she did learn to cope up with the loss. His not being there has taught her to live every moment as if it is her last.

Grace Kinstler, who possibly underwent weight loss in the past, now stands to a height of under 5′ 7″. Also, lately, her bust-waist-hips measurements were recorded as 36-27-40 inches.

Just as boston.com said, American Idol saved the best for last during its season 19 premiere on Feb. 14, 2021.

They were of course talking about Grace after she wowed judges Lionel Richie, Luke Bryan, and Katy Perry with performances of Gladys Knight & The Pips’s “Midnight Train to Georgia”. While the judges were already impressed by her performance yet they asked her to sing a second song. And so she sang Aretha Franklin’s “Natural Woman” and she left them as much astounded as were at the first time.

As a result, Luke, never been this moved by someone’s song during his four years on the show, compared her performance with the likes of Kelly Clarkson and Jennifer Hudson. The “Roar” and “Dark Horse” singer-songwriter, meanwhile called Grace’s voice true magic.

During the Hollywood Round, Grace sang “10 Seconds” by Jazmine Sullivan, “Grenade” by Bruno Mars, and “Father” By Demi Lovato. Advancing in the Top 24, she performed “Queen” by Jessie J and “Midnight Train to Georgia” by Gladys Knight & The Pips.

Grace picked “Elastic Heart” by Sia, “Happy” by Pharrell Williams, and “Into the Unknown” by Idina Menzel & Aurora (from Frozen II) as the songs to perform during Top 16, Top 12, and Top 10 rounds respectively.

As for her Top 7 performances, Grace sang “Fix You” by Coldplay and “When We Were Young” by Adele. Singing a duet with Willie Spence and the other two songs in Top 4, she reached the Top 3.

During the season finale, Grace performed “All By Myself” by Celine Dion and “I Have Nothing” by Whitney Houston. Despite giving it all, she couldn’t secure enough votes to win American Idol.

Still a music student at Berklee College of Music in Boston, Grace Kinstler will be reportedly graduating sometime in 2022.

In 2016, the Chicago native won first place in the “Musical Theatre High School” category of a national vocal competition. Before American Idol, she also appeared in a production of the musical Big Fish. When much younger she even tried her luck in The Voice.

No stranger to performing at big events, she had at some point performed the national anthem at games for Chicago Bulls and Chicago White Sox.

Grace also writes her own music aiming them to have a “message.” She already released a handful of EPs. A recent was the “Lavender” she dropped on her YouTube channel in 2019. On her YouTube and TikTok accounts, the up-and-coming has also been posting videos of herself performing covers of popular songs.

According to some sources, Grace Kinstler’s net worth surpassed $150 thousand.

Grace Kinstler has long ago admitted to dating boyfriend Joseph Wheatley. Officially in a relationship since November 2019, they have never really shied away from confessing their love for each other on social media.

You may peek at Grace’s Instagram (with 173k followers as of May 2021) if you wish to be a part of Grace-Joseph moments. 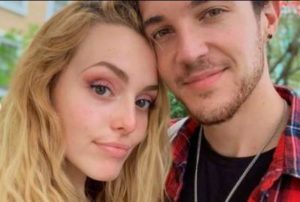 “Happy Valentine’s Day to my hunni! ❤️❤️❤️ It’s so fun spending everyday with you. Catch her on the premiere of @americanidol on @abcnetwork tonight!!! 🔥🤩❤️”

It seems, the two bonded over their shared passion for music. Like, Grace, Joseph is a musician. As we write this, he continued being a student at Northeastern University in Boston. Like Grace, he is set to graduate sometime in 2022.

Tall, fair, and handsome, Joseph has been writing loving and supportive messages for Grace on Instagram, especially in light of her participation in American Idol. Also, he knows he is a lucky guy.

“I’m so proud of everything you’ve accomplished and who you are. I’ve never met anyone quite like you; I’m a lucky guy❤️”