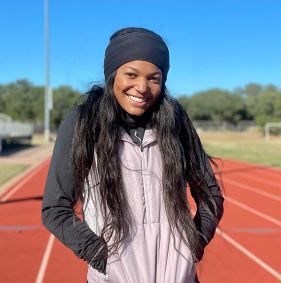 Gabby Thomas is best known as an American track and field athlete who competed in Tokyo Olympics Trials and won the women’s 200 meters. She completed the race in 21.61 seconds which made her the second-fastest woman of all time behind Florence Griffith-Joyner. She also set personal bests in all three rounds of the women’s 200 meters at the Olympic trial.

Scroll down as this Gabby Thomas [Track & Field] Wiki brings you information on her parents, relationships, and career.

Gabby Thomas was born on 7 December 1996. She turned 24 years old in December of 2020. Furthermore, she secured Sagittarius as her zodiac sign.

Gabrielle ‘Gabby’ Thomas and her twin brother Andrew were born to her father Desmond Thomas and her mother Jennifer Randall in Atlanta. Her parents met each other while they were attending Duke University in the 1990s. Her family moved to Atlanta and later they parted ways when Gabby and her brother were 4.

Almost seven years later, Gabby’s mother earned her Ph.D. from Emory University and joined the University of Massachusetts faculty. When the kids turned 11, Jennifer moved the family to Belchertown.

Being a scholar herself, Gabby’s mother enrolled both of her kids in Willston for seventh grade. Since the commute became a trouble to be tackled with, she moved her family again to Florence.

As for her father, Desmond played football at Duke University.

Gabby and her brother are of mixed ethnicity with West African, German, and Jamaican heritage.

On 7 June 2021, Gabby Thomas learned about having a tumor on her liver. She didn’t worry about the issue at first since she believed it was benign. But, her concerns grew as the days passed, and as the frequency of conversation increased with her doctor, the more they started using the word ‘cancer.’

After a test, the result came it and it proved to be benign. So, she took a breath of relief.

Gabby Thomas’s Instagram handles @gabbythomas earned her a total of 56.3k followers. On the profile, she posted a total of 151 times as of late June of 2021.

She could also be discovered on Twitter where she went by the name @ItsGabrielleT. In there, she earned a total of 8725 followers. She made a total of 6152 tweets as of this writing.

The American Track & Field athlete Gabby Thomas has a burgeoning net worth of under $300 thousand.

Gabby Thomas was always athletic. In addition, Williston School which she attended required its student to participate in afternoon sports or activities every semester. So, she chose softball in the seventh grade.

But, because of her fast and quick nature, she decided to onto track later on. Gabby won 12 New England prep championships, 10 in individual events, and two relay titles.

In 2018, she also became the first woman in history to win the 200-meter event at the NCAA championships in a record 22.38. Gabby decided to make her debut as a pro at the New Balance Indoor Grand Prix in January 2019 at the Reggie Lewis Center. In the event, she finished second to Kendall Ellis in the 300 meters with a personal best of 37.03.

Gabby was a five-time All-America selection was coached by Harvard assistant Keena Tolbert even after graduation. Her greatest day as a Harvard Athlete came at Ivy League meet in Philly. At the event, she won five events (100, 200, long jump, 4X100 relay, 4X400 relay).

The Florence-native was also titled the most outstanding performer.

Before the 2021 Olympic trial, she had also gained trial experience in 2016. In the trial, the young gabby competed in 100 and 200 which she completed in 11.35 and 22.72 respectively. She completed 200 where she reached the final and finished in sixth place.

Talking about her training during the pandemic, Gabby shared with Runners World, “There were other ways Coach Bailey kept morale up and got some general fitness in. For a minute there, we were biking on Mondays, along the river, and through downtown Austin. We did paddle-boarding one practice and that was super fun, a good core workout. Another time we played kickball. We were creative.”

As for her education, Gabby Thomas graduated from Harvard University where she studied neurobiology and global health and earned her bachelor’s degree. She also signed a contract with New Balance while in the university.

Gabby Thomas is a highly educated, accomplished, and beautiful woman so anybody would want to date her. However, her dating life remains obscure. None of her socials hold any details on her ever having a boyfriend.

So, the possibility remains, as of 2021, Gabby Thomas is single or hiding her dating life away from public attention.