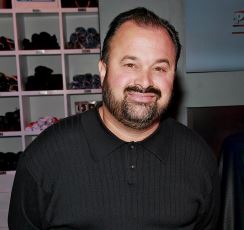 Frank Fritz of History Channel’s American Pickers lost a considerable amount of body weight and this has worried his fans. Furthermore, they wanted to if he was going through some health issues since he lost a lot of weight. This wiki on the life of Frank Fritz attempts to address it all. Scroll down, to learn more about him.

Frank Fritz was born to his biological father Bill Fritz and his mother Susan Zirbes in his hometown of Mound Street in Davenport, Iowa.

While his estranged father lived in Dallas and was never close to each other. However, Frank’s relationship with Bill showed some improvement after he starred on the show. As for his mother Susan, she worked for a construction company. She married her second husband Richard “Dick” Zirbes who was a tire salesman and lived in Bettendorf.

Talking about siblings, Frank Fritz allegedly has a sister but hasn’t discussed much on that front of his family.

Frank Fritz stands tall at a height of 5 feet 5 inches (1.65 meters). Whereas, he weighed about 64 kilograms after massive weight loss. From the very first season of the show to coming to season 8 and season 9, fans noticed the difference in his appearance.

As the star of a hit reality show on History Channel, a large number of fans wanted to know the reason behind it. However, he didn’t address the changes until 2013 when he was ready to discuss his health condition.

Frank opened up about living life with Chron’s symptoms. He had the disease for over 30 years and only after losing weight, he decided to address the concern of his fans.

The symptoms of the disease included diarrhea, abdominal pain, and reduced appetite, and stool mixed with blood. The severeness of the disease caused some change of habit.

Frank started eating healthy and started exercising. He also learned to manage and live with the disease so that it doesn’t affect his ability to go picking. In addition to that, his crew is familiar with his disease and they understand that if he needs a break when he needs it for sure. As a silver lining to all of the difficulties and complexities, he has found ways to remain productive rather than being miserable.

Along with weight loss, Frank’s desire to look good made him get a few tattoos. He got the tattoos from James Hawk at Hawk’s Tattoos. Frank reportedly got sleeve tattoos on his both arms with classic designs. Before that, he had a few tattoos all over his body including his arms.

To start this section of the wiki, Frank Fritz was not on Instagram. However, he surely had a fan account that boasts 71.4k followers in total as of this writing. The account made a total of 28 posts. But, Frank was on Twitter with a verified account. The platform earned him 52.7k followers in total. In the same way, Frank’s Facebook page gathered 682k followers in total. The page is one of the closest that fans can relate to the show.

Frank Fritz started focusing in career early on as a teenager when he took a job at Quad-City Automatic Sprinkler. He also worked at Coast to Coast Hardware that helped him to earn.

From his gig there, Frank earned $4100 to buy a brand new Harley Davidson motorcycle. Frank attended Sudlow Intermediate School in his hometown of Davenport where he discovered several hobbies. He started collecting postage stamps, rocks, or beer bottles.

And it was during his time in Sudlow, Frank met and partner Mike Wolfe. Both with the hobby of collector got along together. Both after graduation from Sudlow Intermediate School, attended Bettendorf High School.

Furthermore, Frank Fritz started working as a fire inspector. During his job there, he covered the area from Des Moines to Cedar Falls in his hometown in Iowa. And even during that period, he loved picking up and creating a collection of firefighter trinkets. Once he bought an item for $25 and sold the same $475 which made him believe he could actually make a career out of it.

In 2002, Frank decided to quit his job of 25 years as a fire inspector and founded Frank’s Finds. He created a collection of motorcycles and fire equipment and preserved it in class cases.

But, Mike Wolfe was the one who decided to take it one step further. He communicated with Crazy Eyes Production for producing videos. The production company pitched ideas to various networks and as fat would have it, History Channel picked the show. Before that, Frank Fritz also served at the prestigious position of ABATE chapter for nine years.

The show, American Pickers, premiered at Capitol Theatre based in Downtown Davenport. And he recalled it as the first time watching himself on-screen. Frank and Mike traveled 22 states on their 2006 Mercedes Sprinter Van and covered 50,000 miles in total in the first season of the show.

Along with the wide recognition, Frank found himself ran in trouble with the law. Authority arrested him for driving under influence. He was heavily under the influence and operating a motor vehicle on the wrong side of the road. As a result, Frank paid $625 and served a year of unsupervised probation.

And during that period, Frank Fritz was able to accumulate a total net worth of a little above $4 million from his earning of $500,000 per episode. The money that he made couldn’t change him, on the contrary, he still drove a 1986 Ford Ranger pickup that he had for 24 years at the time of the interview.

Frank Fritz is a private individual when it comes to details on his dating life and relationship. Owing to the lack of activities on social media both Instagram and Facebook, confirming his relationship status proved to be a challenge.

However, as reported in several news outlets, Frank met the love of his life in September 2017. As his Facebook unfolded, he was dating his girlfriend named Diann.

Frank also shared pictures of Diann and her daughter named Paige along with Paige’s daughter Eulalia. His fans and followers were shocked when he called the infant his granddaughter.

“Diann’s family is my family. It is great being Grandpa Frank! I love my girls.”

Frank Fritz, however, clarified that he was not married to Diann, who everyone presumed as his wife, based on the post. He proudly gushed about finding “the one” in Diann and the post from 2016 said it all.

Surprisingly enough, Frank Fritz also found himself in a rumor of a gay relationship with his partner and long time friend Mike Wolfe. However, the rumor was never confirmed and neither of them felt the need to address the speculations.