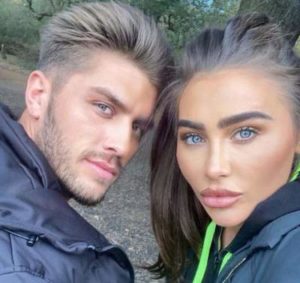 Brit glamour model and television personality Lauren Rose Goodger after years of dreaming about being a mother finally gets to be one!

“So my secret news is out I’m pregnant!…”, she revealed the big news via an Instagram post on Jan. 18, 2021. So, amid all these, here’s everything you need to know about the baby daddy, Charles Drury.

So, Lauren Goodger, is expecting a baby with her much younger boyfriend Charles Drury who turned 23 years of age sometime in 2020. Meanwhile, Lauren, born Virgo on September 19, 1986, was 34 at the time.

Defending his 11 years younger age than Lauren, Charles said the family has always been such a big thing and that he had friends who had kids “from such a young age”. He also emphasized the fact that his mother had him at quite a young age as well i.e. at 17.

He was born in his hometown of Surrey, a county in South East England, and also lived in Nottingham. Although, at the time, one could not tell more about his family background and upbringing.

Charles Drury in his big physique stands to a height of 6′ and a lately reported weight of under 82 kg.

At the time, he had a closely shaven beard, and his slightly blonde hair was styled short with the bulge of hair right at the front of the head curved back onto the rest.

Unlike Lauren who felt pride in flaunting her life on social media pages, Charles decided not to let strangers watch his online activities. But this did not stop him from getting a decent 35.8k followers on Instagram.

Further his Twitter page with almost 8k followers was linked to his Only Fans account where he described himself as a “Dominant BadBoy”, making money from racy snaps.

Charles Drury is a builder and amateur football player who also want to become a professional rapper. Therefore in September 2019, he recorded his debut single, Feelings, which is a collaboration rapper JT, one half of the American hip hop duo City Girls.

Some time ago, he signed with FOMO models and also started his own line of car scents. He created an Instagram account for DruryScents, selling different fragrances including Dior Savage and bubble gum. Seemingly, he had further plans to bring out scented bath bombs, candles, wax melts, and body mists.

This way the former construction worker had saved up to $400 thousand net worth. Meanwhile, his The Only Way Is Essex beau reported a good £2.1million in Jan. 2021.

By 2021, it was no longer news that Charles Drury was expecting a baby with the eight series Dancing on Ice star (partnered with Michael Zenezini).

The pregnancy announcement surfaced after the couple first went public on Oct. 18, 2020. 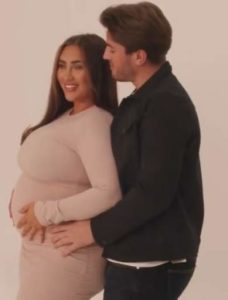 Speaking exclusively in an interview with new! magazine, Lauren said they were quite sexually active and because she was not on “anything [contraceptives]” the pregnancy happened very soon. And while there were rumors they were already planning their wedding, the cover of new! with mom-to-be Lauren flashing her baby bump read:

Lauren: “Charles and I will marry after lockdown— I want to have a big wedding”

Anyway, this would be her first time getting married. She had a few relationships in the past but not one ended up in marriage. She had notably dated Jake McLean and Brit actress Michelle Keegan’s husband Mark Wright.

Just so you know, she also spilled, “I have a strong feeling I’m expecting a girl!”.

Before Charles Drury was known as Lauren’s boyfriend, he had this whirlwind of a romance with Katie Price (an English media personality, model, and businesswoman) in 2019. The pair got talking over Instagram and according to Charles, they met “for a night of passion” at a hotel in the Cotswolds.

But then out of nowhere, Charles made a string of explosive statements about the brief fling after they parted ways and Katie reunited with her ex. Kris Boyson.

Literally being mean, he spoke to The Sun,

“The whole expectation of her being Katie Price – this glamour model – you’re thinking it’s going to be amazing but then it’s an anti-climax…I can’t say zero, can I? I’d give her a 1 out of 10. She was a bit lazy, but then suddenly she would surprise you and jump on top.”

Never stopping there, he continued to brutally ill-fame her branding her for her “recent boob job” and drugs and alcohol abuse.