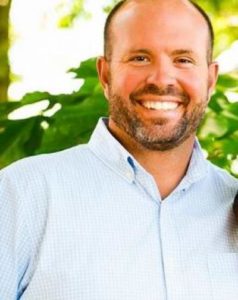 The show follows the tight-knit family living on a sheep farm in small-town Alabama. The context being, the lives Eric and his wife lived as they got sextuplets when trying for one more baby.

The third season of the show had gone on a break after airing its mid-season finale (episode 5) on July 14, 2020. Subsequently, TLC had confirmed that the new episode i.e. season 3 episode 6 will release in the fall of 2020. And, since it is about time, here’s everything you need to know about Eric Waldrop before you dive into another episode of Waldrop clan.

Eric Waldrop was born on 20th December in 1981 in the United States. He turned 38 years of age in 2019’s December and his zodiac sign is Sagittarius.

Eric Waldrop hails from his hometown in Albertville, Alabama. At the time of this writing, topics surrounding his parents and siblings remained completely aloof.

Eric, for his education, went to Alabama’s Auburn University. Both he had his wife went to the same college and graduated together in May in 2004. While there, Eric studied Landscape Horticulture.

Eric Waldrop stands tall in around 5 feet and 11 inches height. Also most lately, he weighed 87 Kgs or 192 lbs.

The father of nine handful kids appears rather contended and cheerful, now and then he features on his wife’s social media content. Because, so far, he did not have any profile of his own, on either of the Instagram, Facebook, or Twitter.

Eric Waldrop continued working as the co-owner of the landscaping business Robinson & Waldrop Landscape Group, LLC. The company is based in North Alabama.

On top of owning his own business, he and his family also lived on top of 40 acres. “Twenty acres of it is a working sheep farm. We have, like, close to 100 sheep right now,” Eric said while answering to fans queries on how he supported the family of eleven.

With his business partner Jeremy Robinson, Eric really seemed to be putting very good use of his degree. Unitedly, they aimed in providing “quality work” in design-build, hardscapes, irrigation, night lighting, and maintenance.

More to it, even the TLC and the Waldrop’s community have helped the family, financially.

Adding to the family income is the GODS DIVINE NINE Jewelry collection, seemingly run by Courtney, with Eric giving her a hand now and then.

Their online store merch earrings, bracelets, necklaces, gifts, and more. To name a few of their collection: the black cross cut out earing sold at $15, blessed bracelet sold at $12, and at this time, most of the items in the store had already been purchased.

In the meantime, Eric Waldrop reported a net worth of around $850 thousand.

Eric met his wife Courtney Waldrop when they both were eighth-graders attending middle school. The couple has been together ever since.

Eric popped the question to his “childhood sweetheart” during their final year of college. And, one month after their graduation, the couple got married in July 2004. 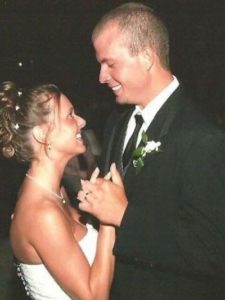 Eric and Courtney were childhood sweethearts before they turned husband-wife (PIC: Courtney’s IG)

Lately, on 19th July in 2020, they celebrated their 16th wedding anniversary. On the occasion, Courtney shared a series of wedding pictures, of them, walking the aisle and exchanging wedding vows. To the post, she captioned:

“16 years ago I married the love of my life!!💗
Things have changed a little since that day we said “I Do” but Thankful for every second of it and look forward to an eternity with this sweet man I’m blessed to call my husband!! I love you Eric!! Happy Anniversary!!💕”

Together, the TV couple has nine kids– Saylor born in 2010, twins Wales and Bridge born in 2013, and the famous sextuplets, Rayne, Rawlings, Rivers, Tag, Layke, and Blu, born ten weeks prematurely in December 2017. 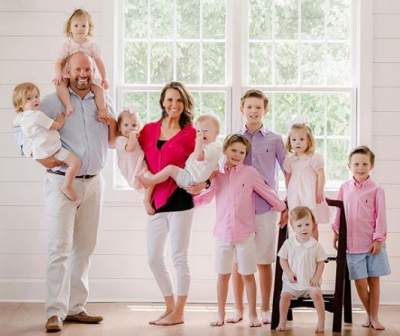 However, the process involved in expanding the family has not been an easy road. According to TLC, some attempts even ended in miscarriage.

During second-time pregnancy, Courtney miscarried and subsequently was diagnosed with a clotting disorder that results in complications in pregnancy.

So, the couple sought fertility treatments, and in early 2012, they welcomed the twins.

After some gap in 2017, they decided on having a fourth child. But this time they decided to forgo medical treatment. The decision did not serve them right and once again Courtney miscarried.

One more time, they turned to their doctor. He put Courtney on a low-dose fertility treatment that was meant to minimize the possibility of having more than two babies. But something super unexpected happened.

Eric and Courtney learned they were expecting not one, but six babies.