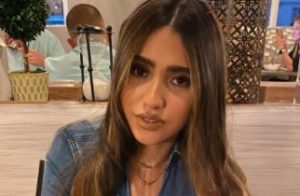 In May 2021, Eliz (who previously was interviewed by investigators on several occasions) agreed to offer an affidavit regarding the event. She shared that Keishla repeatedly called her since January to indicate that her husband was going to leave her.

As per her birthday, Eliz is of the Capricorn zodiac.

While not much about Eliz’s family was shared, Felix on the other hand was an open book to read. He was born to parents, Demetrio Verdejo Colon and Madeline Sanchez; and has two brothers and two sisters —  Yachira, Yovaleris, José and Reichani Verdejo Sánchez.

As of May 2021, Eliz flaunted 40.8K followers over her Instagram. Most of her posts featured her make-up skills, voluptuous body, and her cute baby.

Eliz Marie Santiago Sierra is a beauty and lifestyle influencer. From lip to face to hair makeup, Eliz did a good job embellishing it all. If you understand Spanish, go check her tutorials over her Instagram (because all of her videos were in Spanish).

Also, Eliz is a self-made beauty expert, who gathered her admirers slowly over time.

Whereas, Felix on the other hand, started his boxing career off strong. In 2012, he represented Puerto Rico Olympics as an amateur and won his first two matches against Panama and Tunisia. However, his streak ended when he lost against Ukraine’s Vasyl Lomachenko in the quarterfinals (14–9).

Just by the age of 19, Felix officially became professional under Top Rank, with a contract featuring a $600K bonus. In 2014, he was also named the “Prospect of the Year” by ESPN.

As of 2021, Felix recorded 29 professional matches, with only 2 losses and a total of 17 knockouts. The last time we checked, he was invigorating himself, after losing a match against Masayoshi Nakatani in December 2020.

Eliz Marie Santiago Sierra and Felix Verdejo held their wedding back in December 2012. Commemorating their seven years together, in 2019, Felix posted a long caption over IG. A translated part of which wrote,

“Everything is for a purpose and reborn again in boxing, it is already 7 years that God has given us on earth together, there are already 2 with a beautiful daughter named MIRANDA which It has changed the lives of both of us that you have a happy anniversary”

It seems that the “El Diamante” wasn’t so tough when it came to love his kids. If you regularly follow the boxer over his socials then you wouldn’t be surprised as to how often he flaunted pictures of his daughter Miranda (born Oct 2018).

Trivia: Miranda’s gender reveal was held in May 2018, where Eliz was team girl, and Felix was team boy.

Unfortunately, Eliz and Felix separated on April 26, 2021, following an altercation at Eliz’s family core over his relationship with Keishla.

If you don’t know about what happened — Felix Verdejo was charged with abducting and killing his lover, Keishla Rodríguez, and their unborn child in May 2021. Reports had that, Felix tried to get rid of the baby before Keishla’s murder, and also he was the last one who allegedly went to her house before she disappeared.

Keishla’s body was later found shot dead in a lagoon in San Juan, Puerto Rico, two days after she was reported missing. Felix was then immediately suspected of attacking her and then throwing her body off a bridge near San Juan.