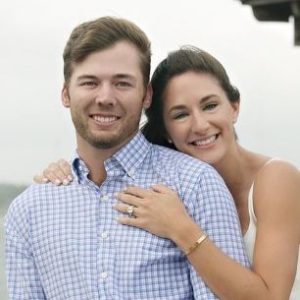 Pro-golfer Sam Burns won his first PGA Tour event of his career in the Valspar Championship. With Sam, attention was also diverted to his family members more importantly his wife, Caroline Burns. Caroline hailed from Louisiana and is the biggest supporter of Caroline Burns.

Delve into this Caroline Burns Wiki to learn more about her Sam Burns’ wife.

Caroline Burns was born on 8 April 1996. She turned 25 years old while celebrating her birthday in April of 2020. Moreover, Caroline secured Aries as her zodiac sign.

Hailing from the hometown of Shreveport, Lousiana, Caroline Burns (nee Campbell) was born to her parents: Chris Campbell and Catherine Cordell.

Caroline’s father, Chris Campbell attended Louisiana State University from where he earned his bachelor’s degree in Finance and real estate. He owned Campbell Companies of Loucisana Inc. where he worked for 23 years.

Furthermore, in Caroline’s family, “Bo” Campbell was a prominent figure in the banking industry. He was also a football player at LSU who had been a star running back for the LSU Tigers in the early 1960s. He played three post-season games during that time period.

Carolin grew up with two brothers Green Campbell and Collier Campbell who were baseball and football player in that respective order.

Caroline looks prettier with fair skin and dimples on her cheek and blue eyes which can be elected as her distinct features.

On Instagram where Caroline Burns earned 2111 followers, she set it private. She posted 135 times on the platform but denying access to the strangers.

In the same way, Caroline is also on Facebook where very little information is shared about her. She is friends with 1260 people. Caroline hasn’t posted anything since December of 2019.

Caroline Burns, along with other siblings, attended C. E. Byrd. She graduated high school in 2014. In school, she was on the track and field team. However, no details on Caroline’s job and career surfaced in the public domain.

With the financial ability that her family achieved, Caroline didn’t feel much pressure to pursue a career. But, she got the biggest job, being the biggest supporter of her husband. She attended all the games.

Together with her husband Sam Burns, she sits on a total net worth of $13 million according to Idol Net Worth.

The love story of Sam and Caroline Burns started young. As a kid, both attended the same church that’s how they got acquainted in the first place. When they were only five, she became his first valentine.

However, Caroline and Sam grew apart only to reconnect in high school and later date in college. From that point on, they have been together. He was in his amateur years. He began featuring on each other’s social media accounts starting from 2015.

The lovebirds got engaged in April of 2019. On 14 December 2019, Sam and Caroline shared vows in a church. On the big day, the groom wore a grey suit with brown boots. The wedding was held at Palmetto Bluff in Bluffton, South Carolina.