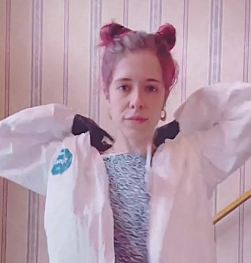 TikTok has all kinds of users aiming to attract viewers to their profile. One TikTok user in particular Eileen Hollis aka TikTok Mortician is going viral for sharing details about her work as a funeral director while living in a funeral home ever since she was a kid.

So, who is this viral sensation Eileen Hollis of Hollis Funeral Home? Delve into this Eilee Hollis Wiki to learn more about her.

Eileen Hollis was born to her father Charlie Hollis and her mother Laurie Turnbull Hollis in Syracuse, New York. Her father worked as a funeral director for over four decades in Hollis Funeral Home. He graduated from Simmons School of Embalming and Mortuary Science in 1975.

A year of residency at John G. Butler Funeral Home in Syracuse eventually earned him a license as a funeral director in 1976. As for his mother, she had absolutely nothing to do with the family business. Whereas, Daily Mail reported that she worked as a seamstress and was briefly employed in the past.

Eileen Hollis grew up in the Victorian-era mansion built in 1982 where her father ran his mortuary business for almost 40 years. She has two siblings she grew up in the house. One is a burlesque dance by profession while the other worked as a librarian.

Growing up Eileen knew what went down on the floor below where she lived but her young brain couldn’t comprehend what exactly went down. They only knew a lot of people visited their house because someone close to them passed away.

Eileen’s pink hair and cat-eye glasses are her distinct features. She was often criticized online for her looks as the commenter felt it was “inappropriate and disrespect” towards the dead, her dyeing hair pink in particular.

Now for the social media reach, Eileen kept her Instagram account private. But the profile earned her 1118 followers where she posted 917 times at the time of this writing i.e. 13 May 2021.

There exists a Twitter account with her name but no activity was seen on the profile. But, the creator’s location matched with her and earned 3 followers in total.

But, it was TikTok that brought all the fame and recognition to her business. The platform garnered 409.5k followers. Her TikToks garnered 5.8 million likes in total.

In Genesee St, Syracuse, NY there stands a Victoria-era mansion, and outside on the front yard stands a clock. The clock outside their funeral home has a Latin inscription— “Tempus Fugit Momento Mori,” translation “Times fly, remember death.”

It is where Eileen Hollis grew up with a normal childhood filled with piano lessons, sleepovers with friends, dance rehearsal, high school shenanigans, and normal stuff. However, her father’s profession had her in a living situation somewhat similar to My Girl and Six Feet Under.

Eileen initially wanted to do something in the creative field so she became a dancer, working as an instructor at Syracuse City School District. However, her romantic life brought her back home. Then, she became interested in her father’s profession and started shadowing him for extra cash.

This eventually led her to join Hudson Valley Community College where she did two years course and earned her associate degree. She graduated in 2016, did a one-year residency at a funeral home, passed a state funeral exam before earned the mortician license.

The subject covered both art and science. While art covered the business and religious elements of the funeral, Science covered the embalming process, cosmetic, and restorative arts.

In the course of four years working in Hollis Funeral Home, she has done 1000 funerals. Her job included cleaning, embalming, dressing, cosmetology, casket placement, and a few others.

But, when she hopped on TikTok with an aim to debunking myth regarding the mortuary procedure, stigma out of death, educate people, she garnered fame out of it. She doesn’t hesitate to discuss macabre elements of her job.

It is a job not many prefers indulging themselves in, so of course, the pay is good. She earns an average $65,000 salary as a funeral director and since it was her family business that definitely contributed more to her burgeoning net worth of $400 thousand.

Eileen Holiis and her husband Neil Hueber have known each other for a very long time, maybe over a decade. As she told BINDLISM podcast host Boho Hobo, her love for Neil brought her back to Syracuse. Now, Eileen Hollis is married and lived in a ‘tiny Hobbit house’ near the mortuary. 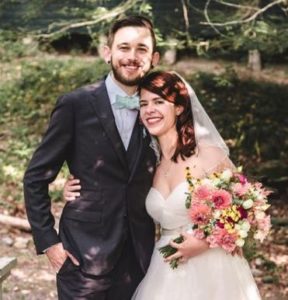 Eileen and her husband Neil together on the day of their wedding (Pic: Hollis Funeral Home Instagram)

She and her husband planned on taking over the business and planned to move upstairs with their own family. Talking about her husband, Neil attended Cocoran High School followed by Syracuse University where she studied architecture.

He formerly worked as Barista/Cook at Funk N’ Waffles, teaching artist at Say Yes to Education, and Barista, Driver, Take Out at Alto Cinco. Later, he switched professions and started working as a bicycle mechanic at Bike Loft East.

Then, Eileen started working as a Bicycle mechanic at Mello Velo Bicycle Shop and Cafe.