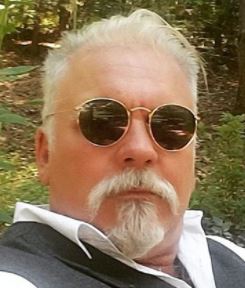 David Baker is not your usual reality TV star. Although he is that too; he is the judge of History channel’s Forged in Fire. But more than that, David is a swords craftsman, an authority in weapon making, a historian of blades.

Read about David Baker wiki and his swords below.

David was born and raised in his hometown of Long Beach, California. He was born in an American family of Caucasian ethnicity.

Apart from that little fact, nothing was known about his family, neither about his young life. Probably, except about his paramour. But more about that in the latter section.

Also, David had a cousin (name not known) with whom, he once danced during a wedding. His cousin was a bridesmaid in the said wedding and he was a guest.

David Baker is a guy with tall height and overall large stature. He stands at a height of 6 ft 1 inch. More on his physical appearance: David has a tattoo of an ancient-looking wheel with spikes.

Also, in a re-aired episode, David was wearing an eye-patch. Many of the fans were concerned. However, it turned out that the episode was several years old and David had only just removed a metal splinter from his eye the day before the shooting. In short, David was alright and his eye patch was temporary.

On a different note, David Baker was also a philanthropist. In June 2020, he won in Forged in Fire: Beat the Judge episode. In that episode, if any of the judges won, $10k would be donated to any charity of the winning judge’s choice. David not only won the episode but also donated the sum to a Breast Cancer Research Foundation.

On Instagram, David mostly posted pictures of old swords and other kinds of blades, and also the pictures of nature: flowers and trees and stones and house interiors. Until Nov 2020, he had 357 posts in total and 131k followers.

On Facebook, David had his own page, on which he posted videos of himself in his workshop. His page had 43k likes and 70k follows.

David started his career in Hollywood as an actor. Those were the 80s and David was young dreamy-eyed. He also worked in a TV show called Call To Glory. However, the lack of exposure soon forced David to the props department.

Then David started to make props (mostly swords and blades) for the movies in Hollywood. Because David was a good sword-maker and could create like-for-like replicas, he was much sought after prop maker in the industry.

During his prop-making years, he also appeared in a TV series called Deadliest Warrior. However, his most famous appearance came in 2015 with the History channel’s Forged in Fire.

Forged in Fire was a competition series, in which four bladesmiths competed to make the best swords. David Baker was one of the three judges who would decide how good the forged blades were.

David Baker usually judged the historical accuracy of the sword and its aesthetic value. The other judges on Forged on Fire were, Doug Marcaida and J. Neilson. The latter was sometimes replaced by either Jason Knight or Ben Abbott.

According to various sources on the web, an average salary of a History channel employee would range from $16k to $148k. Considering that David had worked on the show for 7 seasons and Forged on Fire was one of the more popular shows on the channel, his salary must be on the high end of that range.

David Baker was very hush-hush about his personal life. Some research showed that David was seen quite often with a woman called Nancy McKay Valentine. Now, it was unclear if Nancy was David’s wife.

Some sources claimed that David and Nancy were indeed married. However, Nancy’s son Mike Valentine not David’s but came from Nancy’s previous relationship.

Others maintained that David and Nancy were not really husband and wife but just two good friends. And Nancy’s son Mike (who was not David’s child) was proof of it.

Whether or not they were married, David and Nancy were very close to each other since their young age. 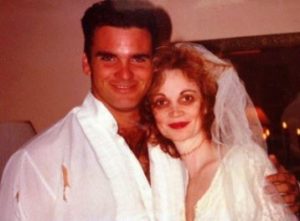 David Baker and his maybe/maybe-not wife Nancy McKay Valentine when they were both young (PC: tvshowcasts.com)

Now, despite the uncertainty about his wife, David’s had some children and his Instagram was proof of that. A couple of times, David had come to Instagram and posted photos with his sons.

According to his IG, David had at least two children: two sons. Beyond that, there was no information.