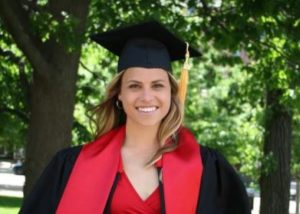 If you’re a Women’s Soccer fan, then you might have seen the name, Dani Rhodes, out on the field playing for the University of Wisconsin. But if you haven’t, then know her as the fiancee to the Pittsburgh Steelers star, TJ Watt.

Keep reading Dani Rhodes Bio to learn more about her.

An Aries girl, Dani celebrated her 23rd birthday filled with “love, joy, and surprise.” Although she didn’t go into detail, she took it to her IG to write, “You truly know how to make a girl feel special. I am so blessed to be surrounded and celebrated by the most amazing people”.

Dani Rhodes comes from a family of athletes. Her brother, Dylan and Drew Rhodes are both football players. Moreover, the former one is also a talented basketball player.

Talking a little about them:

As for Dani’s parents, they are Dan and Deann Rhodes. Her father, Dan is a University of Wisconsin–Eau Claire graduate who went on to work as a regional business director at Pharmacyclics. Not much information on her mother, Deann was available, except for the fact that she celebrates her birthday on May 17.

Dani Rhodes garnered a net worth of around $150 thousand before 2021.

So, what are her job experiences? Well, Dani first started working as a waitress at Cornerstone Restaurant in 2015 (while she was still studying at the University of Wisconsin-Madison). She then went on to work there for over 4 years and finally called in quits in July 2019.

A year later, (after Dani graduated from Wisconsin) she then ventured on a new job (paid internship) as business development manager at CareRev. As of 2021, she was still employed there.

According to her LinkedIn, Dani has also participated in community service, Badgers Give Back from 2016 to 2019. Also, she has volunteered as a soccer coach at Soccer Clinics-Madison from April 2017 to Sept 2019.

But it was highly unlikely that Dani would make it to the final roster.

“It still feels like I’m dreaming. Woke up today feeling so incredibly happy and blessed that I get to marry my best friend. I can’t wait to love you FOREVER!”

Over the picture, Dani was held by her fiancee TJ Watt, while she put out her hand, showing off the big engagement ring.

Meanwhile, TJ also took it to his IG to share the happy news posting similar pictures from the seaside engagement. He wrote, “I am the luckiest man in the world!!”

Seems like the wedding bells will be ringing soon. 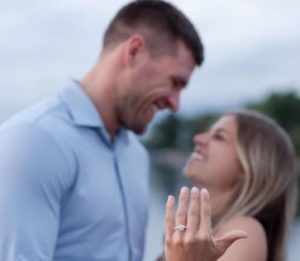 The engagement news came almost 5 years after Dani and TJ were officially dating in September 2016. If you don’t know, the two both attended the University of Madison-Wisconsin, and it was probably where they first met each other. Or they could have also first been introduced by TJ’s sister-in-law/Dani former teammate  Kealia Ohai.

Reportedly, Dani and TJ’s time at the school overlapped in 2016.