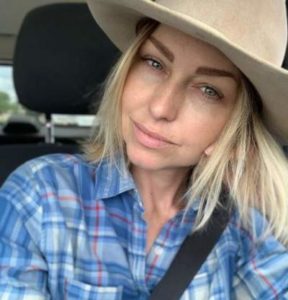 Mike Wolfe, the noted creator/star of the TV show American Pickers, spurred new romance news in early July 2021. Media reports claimed he has been dating someone new after filing for divorce from his wife in Nov. 2020.

And this “someone new” happens to be none other than model Leticia Cline.

Discover all sides of the story in this Leticia Cline Wiki.

Born and raised in Kentucky, Leticia Cline is a Libra who celebrates her birthday every year on October 1. She reached the age of 42 in 2020.

At 37, death came knocking on her door in the form of cancer. But, she “kicked its ass” and now stands as a testament that one does not have to wait for death to teach one how to live. The experience taught her “Life starts when you want it to” more than anything else.

Leticia Cline, with birthname Leticia Ann Bjork, grew up with her dad, David Gene Passmore, building motorcycles in the living room of their house. She was devastated when he passed away in the summer of 2008. Leticia was only 27 at the time.

She rode his Softtail to the funeral and then never got on a bike again until spring of 2014. Later in honor of his memory, she opened a free community motorcycle garage, Smiley’s. Besides, Leticia also runs a bar called, The Dive, with her mom Debbie Passmore and sister Shannon Burke.

Leticia’s parents were married for 34 years. And she also has a brother named James David.

Leticia has tattoed her body with many prominently shaped designs. Back in July 2019, the tattoo enthusiast got three tattoos in three days back to back. She mostly loved her then-inked palindrome Witch, Dive, and Norse Valkyrie wings tattoos.

Until July 9, 2021, Leticia Cline had 88.9K followers on her Instagram @leticiacline.

She also shared her daily balance of being a mother, model, motorcyclist adventure seeker, and journalist, in no particular order, on ‘Leticia Cline’ YouTube channel (with 1.45K subscribers) and two ‘Leticia Cline’ Facebook pages (One of which entertained 17K followers).

Leticia Cline had more than an estimated $1.5 million net worth (before June 2021).

The self-proclaimed “First Female Harley Hooligan Racer” also has been serving as a community development officer at Cave City, Kentucky since Sep. 2018.

For her education, Leticia studied B.S. in Psychology at the University of Kentucky and Western Kentucky University.

Mike Wolfe And Leticia Cline: Dating, How Did They Meet?

So, TMZ lately reported the relationship between Mike Wolfe and Leticia is “pretty serious.”

Also, Fox News had written the couple has supposedly known each other since 2018 and lately, Leticia has been following Mike on American Pickers shoots. However, the rep for Mike and Leticia did not immediately return Fox News’ request for comment.

Leticia marking ‘in a relationship’ on her Facebook’s relationship status also seemed to have ignited the romance rumors in some way.

Before all this, Mike was in news for some time after his former wife Jodi Faeth filed for divorce from him, after nearly a decade of marriage and being a couple for almost three decades. They separated in June 2020. The estranged couple now shares a 9-year-old daughter named Charlie Faeth Wolfe.

Leticia Cline has also introduced herself as the owner of a wolfdog Jack London and mother of a human named Caleb.

Her biography on IMBD also mentioned her as a divorcee. ‘Cline’, in fact, happens to be her ex-husband’s last name.

Caleb, who is on his Instagram @calebelijahcline, turned 19 on May 18, 2021. Last year, as Caleb turned 18, Leticia as an overwhelmed mother wrote a long heartfelt birthday message to him an excerpt from which read:

“…when I look at you I will see my entire life because you are my world and I have never taken for granted the 568,025,136 seconds since you were born. You’re my eternal Friday night sushi date, backpack at motocross races, Indian poker companion, booby trap explorer, wolf dog wrestler, dyslexic inventor, one-eyed French soldier, and mess making favorite person.”

Leticia was still married to Caleb’s dad as of 2015. This, we learned from the likes of “So proud of my husband for constantly pursuing his passions and inspiring others to do the…” tweets she shared on Twitter back then.