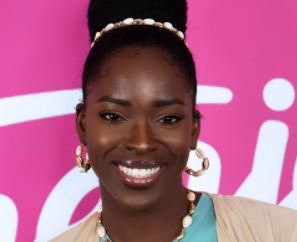 A shocking moment in the history of American Idol — Funke Lagoke fainted and fell face-first on the stage after her duet performance with co-contestant Ronda Felton. We could hear a loud thud, as Funke hit the ground, and see two of the judges, Lionel and Luke immediately rushing to help her.

Keep reading to learn more about what happened, and uncover her life journey as this Funke Lagoke wiki follows.

Funke Lagoke first let her fans know she won “3 yes’s” at the American Idol audition through a tweet dated March 22, 2021. Also, she mentioned that instead of audition week, she would be directly featured on Hollywood week.

But as Funke appeared on the show, the fans were caught off guard. After slaying Barbra Streisand and Celine Dion’s “Tell Him” along with Ronda Felton, and while receiving the judge’s feedback, Funke faints and falls straight to the ground.

Judge Luke, who rushed to her aid, then says, “she busted her chin y’all.”

The show later revealed that she suffered from dehydration and was hospitalized.

Though Funke’s introduction was traumatic, her American Idol continued, and she advanced to the next round. Likewise, her singing partner, Ronda, who cried through the whole ordeal, made it to the next stage as well.

As per her birthday, Funke is of the Taurus zodiac.

Funke Lagoke’s real name is Funmike Lagoke. She hails from Lagos, Nigeria, and is of Nigerian nationality.

Talking about her family, Funke’s father passed away in February 2019. At the time, Funke was amidst her preparation for the Miss Nigeria USA pageant, and she “wanted to give up” after his death. However, with the support of all her family and friends, she collected herself and stayed for the competition.

Also, Funke’s mother was heartbroken after her husband’s death as well. Funke loved her mom and even had a picture of her over FB dated 7 May 2016.

Trivia: Funke was against SARS (Special Anti-Robbery Squad) — a spherical unit within the Nigerian force. She wanted “an Executive and Legislative act to be put in place as well as a Judicial panel.”

Mentioning her distinct features, Funke has dark eyes and loved to play with her hair — Afro, straight, braids, buns, you name it,  Funke did it all.

Also, Funke labeled herself as a “gym lover”, and from the looks of it, she was one! If you regularly follow Funke over IG, you shouldn’t have missed all of her sweat-dripping workout routines.

She shared that she “gotten so many comments about (her) health and fitness journey. Some negative and positive.” but nothing “phrased” her. So, she implored her followers not to listen to the world and just do their thing.

Talking about her musical journey, Funke was a rising star and had no original music entitled to her name before 2021. However, she was already enjoying a successful modeling career then. After winning the Miss Nigeria USA pageant in 2019, she went on to work with a few modeling agencies.

Apart from modeling and singing, Funke was also an “educator.” She shared,

“I have found my purpose in teaching by giving back and being a positive influence and an advocate for our future leaders of tomorrow,”

In light of her education, Funke is a Morgan State University alumna.

Funke Lagoke is a lovely lady, not to mention, Miss Nigeria USA 2019. So, it was plausible that fans believed she must have had someone in her life. However, as of early 2021, Funke revealed no information about her boyfriend and remained private about her dating life.

Maybe Funke planned to reveal her boyfriend after winning the American Idol. So, until then stay tuned with this article. We will keep you updated as soon as any information is available.