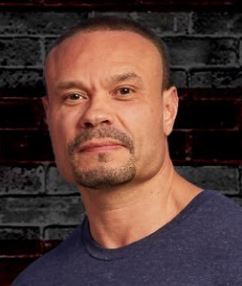 Dan Bongino of The Dan Bongino Show revealed the reason for his absence from the regular show in his radio show in Sept 2020. The public figure who earned a name for himself as a political commentator dealt with a health issue.

Scroll down to know more about what happened to him along with details on his family. Plus, become familiar with the Dan Dongino health update!

Dan Bongino celebrates his birthday every year on 4 December. This naturally elected him Sagittarius that came with character traits such as a sense of ethics and justice, altruistic, and the spirit of every social gathering.

Early life for Dan and his only sibling, his brother Joe, was quite an ordeal. When their biological parents divorced each other of the bad marriage, trouble started lurking in their life.

Both Bongino brothers started living with their mother. However, their mother marrying a 6 feet 5 inches (1.95 meters) man weighing about 136 kilograms (300 pounds) turned their life into a hell.

Abusive step-father and poor and chaotic household made the matter even worse for Dan Bongino and his family. In an interview with Naples Daily News, he reflected on his early life with his step-father.

His anonymous stepfather used to beat his then 5 years old brother. The mean-drunk man once choked him out, and frequent visitation from Child Welfare was no surprise.

As Dan and his brother couldn’t deal with the abuse anymore, they moved out of his mother’s house. They shifted to the place where their father lived, as he took care of them both.

Concern for Dan Bongino’s health arose when he skipped the regular TV appearance in September of 2020. Also, a few fans of his and family noticed an unusual thing on his neck.

On 23 September, addressing the health concern, Dan made a remark that people noticed a lump on his neck on his radio show. However, he overlooked the seriousness of it and didn’t go for a checkup.

As Dan unfolded, he always had Lipoma, a fatty lump under the skin. Though Dan opted for treatment of the lump, it was never seriously life-threatening.

However, after pressure from his wife and his doctor friend, Dan Bongino visited a radiologist for the check-up. The MRI examination came with a disappointing result and as it turned out the lump was a tumor, instead of Lipoma.

Talking on his radio show, Dan emotionally shared that the tumor spanned 7 cm in length, as his immediate test showed. What made the matter worse is the tumor developed near the carotid artery and vocal cords.

In addition, the MRI revealed Dan developed a degenerative neck disease in his C5 and C6. And the illness restricted him from moving his neck. Moreover, Dan also that there was another tumor developing in another part of his body.

All of it happened within 48 hours of him knowing about the tumor. So most of the details on his further plans for treatment remained a mystery.

What Is Dan Bongino Net Worth?

Before Dan Bongino found his voice to speak on the political climate of the united states, he served as a police officer in NYPD. He joined NYPD in 1995 and served until 1999.

He also shared the reason why he joined NYPD where he gave all of the credit to a female cop who stood at a height of 5 feet 1 inch. The way she confronted a tall Italian man and tell him to go intrigued him more to join the police force.

In 1999, he also served as a special agent with the ‘United States Secret Service’. Later on, he joined James J. Rowley Training Center based in Beltsville, Maryland, in the United States.

In 2006, Dan made it to the ‘U.S. Presidential Protection Division’ for George W Bush for his second run as a U.S. president. Likewise, he also served for former president Barack Obama.

Later on, Dan changed the route of his career and found himself a success as a writer and political commentator. He also found success in both print, digital media, and broadcast media.

New York native also runs a podcast that can be streamed in SoundCloud and Google Podcasts. He also started Dan Bongino Show in 2017, a show that revolved around political issues.

Dan also stepped into politics defeating nine candidates in April of 2012 making it a Republican primary. However, he never planned about getting into politics.

Dan reportedly reports on an average salary of $87,000 to $95,000 every year. All of it could be traced back to his income from CRTV Las Vegas, MacMillan Publishing, and media hosting. His salary hugely contributed to his total net worth of $1.5 million.

Who Is Dan Bongino Wife?

In 2001, Dan Bongino and his wife Paula Andrea Bongino met each other for the first time at Sullivan’s, a New York restaurant through a mutual friend. Dan immediately fell for her and the couple went on their first date.

Two weeks after their date, the 9/11 terrorist attacks happened and the only person he cared about was Paula. But, due to her lucky stars, Paula went to Nevada to visit her mother.

After dating each other for a while, Dan eventually proposed her and she was expecting it. In fact, Paula knew he was going to propose her for marriage.

The couple went on welcoming their first-born Isabel in 2004. Paula revealed that she was pregnant with a second child on the day Dan quit his job as a secret service in the White House.

They then welcomed their second daughter Amelia in 2012. Though Dan deeply loved his wife and his daughters, he displayed honesty admitting that marriage is a tough thing.