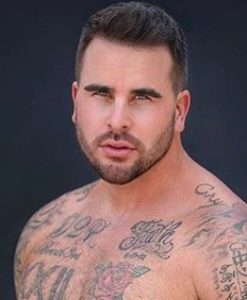 It’s been said that 90 Day Fiance: Before the 90 Days celeb Yolanda Leak does not take long before she moves into a new relationship. Originally, she featured on the fourth season of 90 Day Fiancé spin-off with Williams from England.

Meanwhile, at the time of this writing, she had been dating another man named, Josh Seiter. Josh happens to be a contestant on the 11th season i.e. Kaitlyn Bristowe’s season of The Bachelorette. He was eliminated shortly in the first week.

Here’s a full-coverage on this Josh Seiter wiki and his romance with Yolanda.

Josh Seiter turned 32 years of age, at some point in the year 2020. He was born in 1988, and at the time of this writing, his birthday as well as zodiac sign stayed unheard-of.

He comes from his hometown in Chicago, Illinois, the United States. Plus, Josh opted not to divulge family info.

The former Men Of The Strip cast member, Josh Seiter stands to a height of 6 feet. Some years prior, his weight was listed as 185 lbs.

Josh Seiter boasts 229k followers on his Instagram which also happens to be a private account. On his bio, he writes “YL 👩🏾‍🤝‍👨🏻” publicly admitting to his relationship with Yolanda Leak. 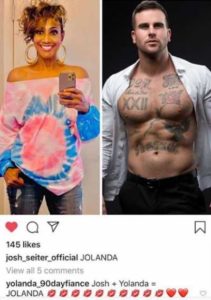 Though it seemed not everyone is impressed with their relationship with some big age gap. One of many critiques on their affair commented that Yolanda was being desperate for young men. (Yolanda is 19 years Josh’s senior). Others wrote that Yolanda and Josh were just advertising their “personal business”.

And, time and again, Josh was seen defending Yolanda and what he had with her. Not long ago, he wrote,

Further, it seemed Josh was not that into other platforms including Facebook. While he was on Twitter with the handle “That Lawyer Guy”.

With a legal educational background, Josh Seiter listed his occupation as “Law Student/Exotic Dancer” on his ABC profile for The Bachelorette. Further, he mentioned “graduating from law school” as his greatest accomplishment.

He happens to be a 2013 graduate of the IIT Chicago-Kent College of Law. Although some research, at the time, did not see him as a licensed lawyer.

Instead of pursuing his career as an attorney, he seemed to be making his way around the reality TV world, first as a cast member on E!’s Escape Club.

Previously known after his stripper name, Andrew Dean, Josh could be appearing on future TLC content, if everything goes well with his and Yolanda’s engagement.

Also, not long ago, Josh Seiter reportedly thanked Yolanda for convincing him to hang up his “exotic dancing shoes” and put his law degree to use.

Not to mention, back in the days, he had confessed of not wanting to practice law. This was when he worked for Cowboys 4 Angels, an elite male escort service that was featured on Showtime’s Gigolos.

This way, Josh Seiter is said to have managed around $300 thousand net worth.

Is Josh Seiter Both Gay And Racist?

At some time before, Josh Seiter was an exotic dancer. Also, most of his selfies are of him shirtless – showing off his muscles. Most likely because of this, some 90 Day Fiance fans accuse his actions to be “attention-grab for clout”. The hate-comments go to the extent of him being referred to as gay. There’s a whole rant going on Twitter over a picture of him posing intimately with two other guys. All of these guys dressed only in undies in what appeared to be pornography.

As about him people calling him racist and white supremacists is all thanks to the series of racists videos he created together with Bryan Hawn. With the title “Dear Black People” in one of the clips they mockingly advised people of color to just apologize police officers and call them ‘sir’ if pulled over.

Josh Seiter showed off the ring he bought for Yolanda Leak. The screenshot of which Yolanda shared on her Instagram on the 24th of September 2020. She responded with heart and crying emojis. Meaning she is definitely up for being Josh’s wife. 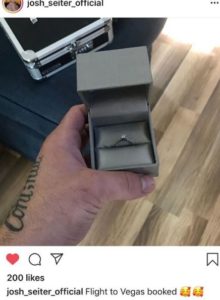 But, the way he showed off the ring before popping the question in person, confused some of 90 Day Fiance fans. Anyway, people have always looked for a deal-breaker or some complications in their relationship. Of many other things, they also pointed out that Josh wanting to start a family with Yolanda may cause problems. They meant to refer to Yolanda’s age.

Reportedly, the pair started dating since August 2020. And ever since they had been trying their best to discourage the “desperate attempts by prejudicial people” meaning to attack their “interracial relationship.”

Most tragedies occur without warning and sometimes they leave devastating impacts. It takes someone with a...