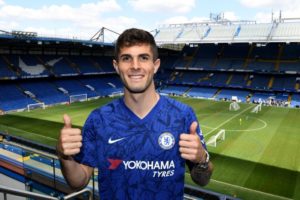 In the friendly match between the USMNT and Mexico national team in September 2019, soccer fans had their eye on Christian Pulisic to see him change the track of the game.

Though the United State lost 3-0 to Mexico, Pulisic finished with a 6.037 ranking and got crowned the “SSFC Man of The Match.”

Pulisic drew backlash after the former Borussia Dortmund player alleged that the USMNT was scared of their rival. Fans and pundits called him to take the leadership role.

Here are some insights about Pulisic that fans are eager to know.

Both of his parents – Kelley Pulisic and Mark Pulisic – played collegiate soccer at George Mason University.

Pulisic’s choice for his first tattoo is quite patriotic. On his left arm, he has a large eagle with the American flag. Though his body-art looks majestic, it is quite weird for a guy who wanted to acquire Croatian Citizenship.

He holds both Croatian and American nationality. During his stint in Bundesliga, the dazzling forward felt it tedious to renew his work visa while he was in Europe.

That said, it is still unclear whether Pulisic has earned a fluency in Croatian.

After several stints at youth level teams in England and States, he realized his dreams after making it to the across Atlantic.

How Much Does Christian Pulisic Make A Year? Contract, Stats & Net Worth

Beginning with Borussia Dortmund, Christian Pulisic signed for the German club’s youth team in 2015. A year later, he made his first-team debut against Union Berlin.

His salary at the Bundesliga outfit was quoted around $1.1 million per annum.

In total, the speedy winger played three and a half campaigns with Dortmund. Featured in 127 games overall, he registered a stats of 19 goals.

Though not confirmed, the agreement sees Pulisic earn more salary than he did at Dortmund. Nevertheless, the deal made him the most expensive US soccer player in history.

Playing for Chelsea, he dons the #22 jersey. Meanwhile, 10 is his designated number with the national team.

A Nike-sponsored athlete, Pulisic owns sponsorship deals with brands such as Panini, Hershey’s, and Gatorade. Considering his marketability, he should own at least eight-figure sum in net worth.

One of the reasons why Christian Pulisic was so high achieving at Bourassa Dortmund was his sheer focus.

No one can confirm of him having a girlfriend while his time in Germany. But then again, the speedy winger is quite good at keeping his personal and relationship life to himself.

20-year-old US National Team captain prefers to be focus on his performance as opposed to answering questions about his dating life.

An excellent piece of the news for the fans of his current and national team indeed!

Paris Hilton’s Youtube documentary titled “This Is Paris” premiered on Sept 14, 2020. And...

Clemson Tiger Athlete Trevor Lawrence turned heads when he started a COVID-19 fundraiser with his girlfriend...