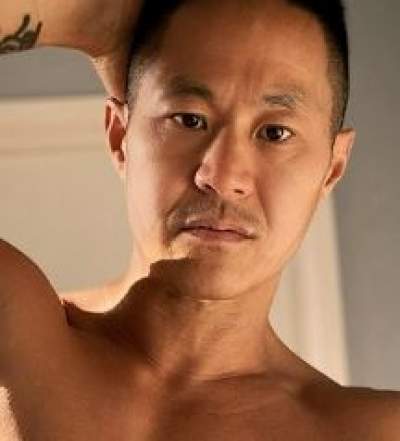 Writing “I said yes …OH and the ring made me gag it’s so beautiful” on their Instagram American media personality, model, singer, and songwriter Cortney Stodden announced their engagement to boyfriend Chris Sheng on May 30th, 2021.

Ever since her fans have been interested in this man who presented Courtney the jaw-dropping engagement ring.

So, below this Chris Sheng wiki covering all about him.

As a Leo born on August 15th, Chris Sheng reached the age of 41 in 2020. Meanwhile, his fiancé, Courtney Stodden, is a Virgo who turned 26-year-old in Aug. of the same year.

Chris Sheng’s father died of cancer after a 10-year battle with the ailment in 2008. Lately reminiscing his dad’s memory, Chris wrote on his Instagram, how he has been wondering who he was as a person and not necessarily as a father, son, husband, or brother.

“Like what was he thinking about in this picture? What was he doing the day before or the day after? Unfortunately, I’ll never get the chance to ask these questions. I’ve had to make peace with that fact.”

He also then added he knew his dad as two people— “the tough, disciplinarian immigrant (pre-cancer) and the pensive, almost buddha-Esque philosopher (post-cancer).”

Luckily, Chris has his mom still alive and healthy. In May 2020, he got a chance to celebrate his “beautiful” matriarch’s birthday and at the same time express his gratitude for all she has done in his life.

Seemingly an only child, Chris is a proud Asian born in Chicago, in northeastern Illinois, the United States.

He grew up never fully comfortable in his Asian skin. Speaking against Asian hate, Chris explained that his two best friends as a kid were white. And it was not until he moved to Los Angeles that he had his first Asian friend. But again, he never bought into the Asian stereotypes and he feels beyond proud of his heritage and of the courage it took his parents to immigrate to America and start a new life.

Chris Sheng stands to a 5′ 8″ or 1.73 meters height. He has been documenting his body transformation and weight loss journey on a separate Instagram account since early 2020. It took him a year to become 159 lbs from 169 lbs. He was yet to announce his succeeding progress.

Chris Sheng, as an owner of multiple startups in the Los Angeles Metropolitan Area, saved an estimated $2 million and net worth (before May 2021).

At present, Chris is a CEO and founder of Growth Team, growth advisor at Mucker Capital and involve.ai, chief marketing officer at Oaklo, Head of Demand Generation, and growth consultant at CircleIn, GoCheck Kids, Liquid, OnDelta, and Metricstory. He is also a member of the Revenue Collective.

In the past, Chris did several likewise jobs while also being the CEO and co-founder of Renly for over three years.

On May 28, 2021, Chris Sheng proposed to the love of his life, Courtney Stodden. And they of course said, Yes.

Chris reflected things did not happen the way he had planned it originally. But even so, he is confident the moment was just “right.”

This is an excerpt from his lengthy announcement on Instagram.

“I feel so blessed and fortunate. We have both grown so much since we first met, and the fact that we have both been able to grow into better, stronger, more secure individuals while still being in a relationship together makes me have faith that this partnership will last a lifetime…”

They started dating in 2017, amid Courtney’s split with now-ex-husband Doug Hutchison.

More about Courtney Stodden’s past, the “Pink Flamingo” singer had married Doug in 2011 when he was 50 and they were 16. The marriage received extensive criticism, controversy, and media attention. This led to them appearing the reality TV shows like Couples Therapy, Celebrity Big Brother, Reality Ex-Wives, The Mother/Daughter Experiment, Celebs Go Dating, and Courtney.

Eventually, they separated in 2017, filed for divorce the next year which was finalized only in Jan 2020. And in March 2021, Courtney issued a lengthy statement on Instagram spilling how they had been scared to even speak up about feeling groomed or being verbally abused by Doug during all those years being married to him.

“You’ve left me — a child woman, feeling belittled and confused. These things I shall overcome. I wish you well. But please don’t ever do this to another minor again. It’s not right… even if the parent signs off. Wait a respectable amount of time before marrying. Children aren’t on your level. I’ll always love you regardless. Be better. As shall I.”

It took Chris Sheng to become a 41-year-old when he finally felt like having ownership over his life. Reflecting on his life at this stage, he recalled some of the rough patches that included feeling stuck and not being able to even score an interview at Starbucks (a finance job to him was far less likely back then). He spoke all about feeling so defeated by life but never once mentioned a fail marriage anywhere in the stories he thus far shared. So, it seems Chris does not have an ex-wife.