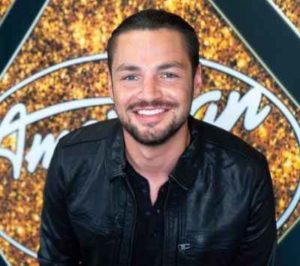 American Idol renewed for its fourth season and 19th season overall on ABC on February 14, 2021.

Audiences, like always, already had an idea about who may come out on top. Apple Valley, California native Chayce Beckham was one of them. To their delight, Chayce did win the season.

His mother is Windie Clifton-Petersen (age 48 in 2021). She continued living in Apple Valley, in California, the hometown where Chayce was brought up.

Windie is active on Instagram and Facebook and her last post on Facebook was a shout-out to Chayce’s American Idol fans to vote for her son during the live show only for their vote to count.

Besides, there is Chayce’s stepdad Terry Petersen in the family picture. Terry is a realtor at Agio Real Estate Inc.

Last year (2020) in June, Chayce’s followers on Instagram saw him go on the trails with his pretty young-appearing “pops”. Although one could not tell with certainty if Chayce was referring to his birth father or stepfather.

Not to miss: For siblings, Chayce has two sisters— Tiffani Beckham and Madison Beckham.

Chayce Beckham, the self-described surfer, skater, singer-songwriter, and fisherman stands tall to above 5′ 11″ in height.

“Family is everything!” to Chayce who also told local news that his mother and stepfather signed him up to audition for American Idol.

Sometime in 2020, Chayce drove his truck while intoxicated and ended up in a horrible accident that left him “on the side of the highway upside down.”

This brought a big turn-up to his life. He split up with his girlfriend and lost his house. So, he went to live with his parents (mom and stepdad). Some time into it and his parents pushed him to audition for the show.

“I think that they really just saw that I was kind of giving up on my dreams a little bit. So they strongly encouraged me to audition.”

He initially auditioned in Los Angeles singing “What Brings Life Also Kills” by Kolton Moore & The Clever Few. “You Should Probably Leave” by Chris Stapleton gave him the ticket to ‘Top 24 semifinalist.’

Later, he sang “Afterglow” by Ed Sheeran and “Drive” by Incubus, landed ‘Top 16’ place, and was judged safe for the ‘Top 12’ where he sang “(Everything I Do) I Do it For You” by Bryan Adams. Reaching the ‘Top 10,’ Chayce sang  “Baby Mine” by Betty Noyes. He then performed “Magic” by Coldplay and an original song called “Mama” during the ‘Top 7’ round.

Meanwhile, as the ‘Top 4’ contender, he sang  “Colder Weather” by Zac Brown Band. What’s more, he also sang “23” a reprise of “You Should Probably Leave” by Chris Stapleton and “Break My Heart Again” by FINNEAS in a duet.

Defeating Grace Kinstler & Willie Spence, Chayce Beckham took home the crown of American Idol. In the season finale, he sang “Blackbird” by The Beatles, “Fire Away” by Chris Stapleton, and “Afterglow” by Ed Sheeran.

By 25 May 2021, Chayce has entertained the highest of 225K followers on Instagram. Also, more than 16.1K people saw his tweets on Twitter; 37.9K and 2.6K followed him respectively on his handles ‘Chaycebeckhammusic’ on Facebook and TikTok.

So, the musician from Southern California worked operating heavy machinery. The judges on the show thought this former job of Chayce is what has added to his “down-to-earth style of performing.”

Judges Katy Perry described that he sounds like he operates a forklift and Luke Bryan affirmed to him that he is what the show is all about.

Anyway, for the net worth, the singer-songwriter was reported to have collected less than $150K riches until early 2021.

Just so you know: The average salary for a sales representative in California (according to some indeed.com report) is $69K per year with a $12K commission each time.

Before American Idol, Chayce performed in a reggae band called the Sinking Sailors.

Chayce Beckham was only three when he started messing up with a guitar. While facts as such are famous stories to his fans, he well disguised his dating life from the world.

He is, however, ‘in a relationship’ considering the dating status on his Facebook profile. So, a brief peeking into his online gallery, and we discover a couple of pictures of him and his possible girlfriend (dated at different times in 2017).

She may be his girlfriend, the one we spoke of earlier, or not. One could not tell. Also, no such exchange was located on his socials in recent times.