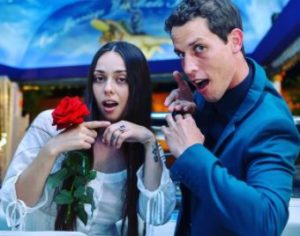 Well, if you are a sucker for standup comedy, like us here in starsoffline.com, you must know Tony Hinchcliffe. He did some stupid thing and used a racial slur to insult his fellow comedian and he has come under a lot of fire. Well, for those of you who still like him, here is an article about his wife, Charlotte Jane.

Read this Charlotte Jane wiki and learn about her relationship with Tony as well as the story of her famous father. As well as some info like her age and job.

Charlotte Jane was born to parents Robert “Bob” Jane and Laree Jane in Australia. Her father is an Australian icon, also known with the title of “tyre king”. Bob started his first car dealership at the age of 21 with his younger brother Bill.

Later in life, Bob went on to open Bob Jane T-Marts store in Melbourne. It became one of the most popular brands in Australia and made Bob a multimillionaire. He was also a racing enthusiast and brought stock car racing to Australia.

His success in business and sports was almost rendered useless because he struggled with his family. Bob had a long and messy divorce with his wife (and Charlotte’s mother) Laree. Apparently, Laree used to threaten him with a knife as well as with a gun. The court had to issue an intervention order against her.

And then there were also financial troubles with his son Rodney (from his previous marriages). Bob filed a $2.9 million lawsuit against Rodney for the tire business. The court dismissed the case and Bob went bankrupt in 2016.

Bob died in late September 2018 because of prostate cancer. The Jane children all mentioned that Bob was a great father.

Charlotte has two siblings, Courtney and Robert Jr. And of course, there was Rodney, who was a half-sibling.

Charlotte Jane stands at a height of 5 ft 4 inches. And she weighed about 50 kgs. Furthermore, she has jet black hair and blue eyes.

By May 2021, Charlotte Jane had a decent following on social media. For instance, on Instagram, she had 24.8k followers. Although, she had kept her Instagram private. She was also present on Twitter but only had 90 followers.

Charlotte also had an Onlyfans account with over 300 subscribers.

So far, we did not know much about Charlotte Jane’s job. It was most likely that she is an entrepreneur, or at least on a path to be one. She had a profile in the app depop called Baby Jane and sold curated products over there. Among other things, she sold slippers, tops, pants, elegant dresses, and so on.

Charlotte is also a pin-up model and a little bit of an Instagram influencer. She was also among the contenders to be the next Covergirl for the Maxim magazine. There was a voting system for the Covergirl of the magazine and as of May 2021, Charlotte was the first in her group.

Apart from that, we know nothing about her job. As of 2021, Charlotte Jane reportedly had a net worth of $500 thousand.

Charlotte Jane is reportedly married to comedian Tony Hinchcliffe. According to Tony Hinchcliffe, he and Charlotte were married in 2015. However, there was a 2017 photo on Tony’s Instagram, which mentioned that they were honeymooning in La Jolla. Pretty long honeymoon, if you ask us, from 2015 to 2017.

If you do not know Tony Hinchcliffe, he is an Australian comedian. His Netflix special One Shot was released in 2016. He used to be a writer for Comedy Central’s The Burn with Jeff Ross. Charlotte was a running gag in his comedy set even before their relationship was really out in public.

In 2021, Tony had come under fire for using racial slur in one of his sets. He insulted a fellow comedian Peng Dang, who was of Asian descent using some racial slurs against Asian people. As a result, Tony was dropped by his talent agency, WME.

There were some curiosities among fans about whether Tony was gay or not? Well, he married Charlotte. So, it was highly unlikely that he was gay.