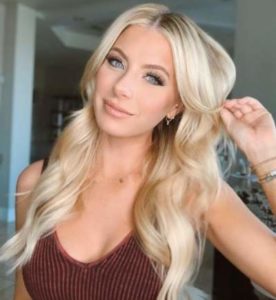 After some time of exploring prospective romances on several Bachelor nation shows, Emily Ferguson said finally said “Yes!” to marry the man of her dreams.

On a 13 December 2020 Instagram post, she let everyone know how happy she is taking off on yet another ride with her perfect person.

“I get to marry the man of my dreams ❤️💍 this is a moment I’ve dreamed of since I was a little girl”.

Now, she couldn’t wait to grow old and laugh forever with her professional hockey player beau.

Here’s everything you need two know about Emily, and her stories with soon-to-be husband William Karlsson, she has not yet shared with the world.

Emily Ferguson turned 28 years of age in October 2020. Her birthday i.e. the 9th of October makes her zodiac sign Libra.

Emily Ferguson grew up in her hometown of Las Vegas, Nevada.

She has an identical twin named Haley Ferguson, who appeared alongside her on The Bachelor back in 2016 during. Actually then, they competed for the affections of Ben Higgins on the dating show.

Both the siblings returned for multiple seasons of Bachelor in Paradise before landing on their own spin-off series, The Twins: Happily Ever After.

Just like Emily, Haley is dating a professional hockey player beau with the name Oula Pale.

More to siblings, the twins also have a brother, Kyle James Ferguson, who turned 30 in March 2020.

Besides the other half Haley, Emily also shares the occasions spent with her mother and grandmother on her social media, now and then.

On her Twitter page, Emily had 73.5K followers until mid-December in 2020. Further, respectively on Instagram and Facebook more than 99.5K and 4K people were following her.

The only fact revealed under her educational background is: circa 2011, Emily Ferguson went to Silverado High School. Her Facebook page also mentioned her former job as a model cocktail server at Marquee Las Vegas from 2014 until 2016.

Ever since she pursued her career mostly as a reality Tv personality or a social media influencer, adding to her existing net worth promoting brands. Not to mention, she is also the co-creator of the beauty, health, and fashion blog Blondesense702 as well as the YouTube channel of the same name.

By 2020, Emily Ferguson is believed to have grasped a sum exceeding $500 thousand.

We saw Emily making slightly further on the journey to romance Ben Higgins than her sister in the Season 20 of The Bachelor. However, it was not the meant-to-be love connection and so after week 7, she was sent home.

Sometime in 2013, she briefly appeared on CMT’s Dallas Cowboys Cheerleaders: Making the Team, where she was eliminated in the first episode. This was most probably the first time she tried her luck on television.

Just at the same time as Emily, her now-fiance William Karlsson too took to his Instagram the good news of them getting engaged. “She said YES!! 😍😍”, he wrote a picture of them holding hands, him kissing Emily while she also flashes her engagement ring. 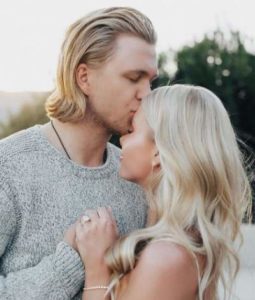 They have publicly been a couple since November in 2017 and have never skipped an Instagrammable moment in the years.

The way they chronicled every stage of their romance on social media, fans anticipate them to do just the same soon when they get married. Although as of the date there is no wedding or baby news yet.

Circa June 2019, the pair had made Las Vegas, Nevada their permanent home together. The development followed after William officially started playing for the Vegas Golden Knights into the 2026-2027 season.

Professionally, he is a hockey forward who was drafted by the Anaheim Ducks in 2011. Since then he has gone on to play for teams like the Columbus Blue Jackets and Vegas Golden Knights. At the 2017 Ice Hockey World Championships, he had won the gold medal representing Sweden.

Next One: Chelsea Laden Wiki: Partner, Net Worth, Baby Daddy