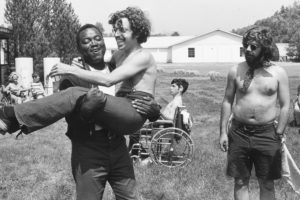 Netflix premiered a one of a kind documentary on 25 March 2020 named Crip Camp: A Disability Revolution.

The documentary focused on the social movement which helped inspire the coming generation including the ones that enrolled when it was opened first. It was the origin story of Camp Jened.

Welcome to the wiki-style article which was crafted to ease readers into the subject matter of Netflix’s newest offering. Scroll down as the details unfold.

In 1952, American hippie culture was on the verge of a rise. Though it took another decade and a half for the culture to flourish, they certainly started a movement regarding the disabled group.

The Hippie commune initiated Crip Camp, a summer camp for the handicapped ran by hippies. The Catskill, New Yorker launched the recreational camp for their children who were suffering from Cerebral Palsy in particular.

The camp welcomed individuals of every creed and color with a developmental disability. During the peak time of the camp, the young campers who had sheltered there went on to become notable personalities in the American Disability Right movements.

More From Us: Charlotte Hope Boyfriend, Husband, Net Worth, Parents

She had later founded the organization Disabled in action, and had Jimmy Carter and Richard Nixon administration to carry out the Rehabilitation Act of 1973.

The camp provided the sanctuary for the alienated group of individuals who discovered like others in the society, they too can enjoy life as it is.

The camp in the newest form allowed them to explore the Catskill Mountain region along with boating, performing arts and a sensory room.

Like every other organization, the funding had become the most for the camp to survive. But due to the financial difficulties it faced the camp was closed in 1977.

But after three years in 1980, the camp reopened and thrived for another 25 years to come. Cerebral Palsy Association felt the need for the camp so they funded the running costs and took it under as its branches.

In 2009 the camp was closed again for the pecuniary troubles it had been facing since for almost 3 decades. In 2017, a 175-acre property of the camp was purchased by the town of Rock Hill to recreate it as the town park.

So, Camp Jened is in a situation where its existence is hard to be ascertained.

To maintain the fluency in its operation, the camp had several rules which had to be followed strictly for safety as well as avoiding possible legal consequences.

The campers weren’t allowed to wander beyond the premise of the camp. Similarly, drugs and alcohol were strictly banned inside the camp.

However, the management did allow smoking. They had mapped a different area inside the camp for the smokers called ‘Smoking Table.’

Barack Obama and Michelle Obama, produced the feel-good documentary in collaboration with director Nicole Newnham and Jim LeBrecht. Crip Camp was a loving way of addressing the Camp Jened.

The footage was shot by journalism collective by the name People’s Video Theatre in the year between 1970 and 1972. The second half of the film focused more on Judy Heumann along with other camp attendees who went on to become a Disability Right activists.

In 2020, the film competed and won the Audience Award at Sundance Film Festival while also being nominated for Grand Jury Prize.

Also, It took part in the Miami International Film Festival and won Zeno Mountain Award while it was also nominated for under the category of Best Documentary in the same.

Mathew Killip’s John Was Trying To Contact Aliens premiered in Sundance 2019 and the show garnered rave...