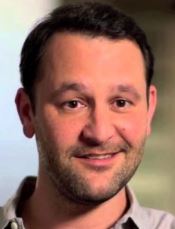 Who is Dan Fogelman?

Well, a short answer: he is an American producer and screenwriter famous for works like Pixar’s Cars, Disney’s Tangled, and NBC’s This is Us. A more sophisticated answer: Dan Fogelman is an artist with a great creative vision for the comfortably light-hearted, heartwarmingly funny, kids-centered, or almost kids-centered, storytelling.

Read the article below to know more about the man behind some of your favorite comfort movies and TV shows.

So much of the credit for his fantastic movies and TV shows go to his childhood days in what he calls an “endearingly dysfunctional” New Jersey family.

Dan Fogelman was born on 19 February 1976 in River Vale, New Jersey to Joyce and Marty Fogelman. Growing up, he had a sibling, a sister. All three of his family members were inspirations for many of the characters he created as a writer.

His relationship with his mother inspired his 2012 comedy The Guilt Trip. His father and sister’s clone-characters appear in the ABC sci-fi sitcom The Neighbors.

His most famous works, as a writer, are two animated movies (Disney’s Tangled and Pixar’s Cars), Glenn Ficarra and John Requa directed rom-com Crazy, Stupid, Love, which was one of the most popular movies upon its release.

Dan created NBC’s hit TV Show This Is Us, for which he was also a writer, creator, and producer, and Fox’s sports drama Pitch.

He also directed a couple of movies: the star-studded comedy biopic Danny Collins in 2015, and the romantic drama Life Itself in 2018.

Dan Fogelman married actress Caitlin Thompson on 13 June 2015 and the married life was still on at the time this article was penned.

Judging from what they let out on social media, the married life of Dan and his wife Caitlin seemed to be going very strong. 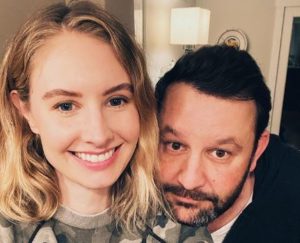 Dan and his wife Caitlin celebrating the 2020 new year together (PC: Caitlin’s IG)

The husband-wife couple was never shy about showing their happiness on social media. They openly and gracefully shared the important occasions, be it New Year, or their anniversary, or their works.

For instance, the couple celebrated their most recent anniversary in 2018. Caitlin went on Twitter to post a picture from their wedding day, Caitlin on her white wedding gown, and Dan on his Prussian Blue Tuxedo. 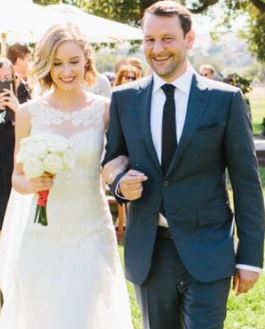 Dan Fogelman and his wife Caitlin Thompson during their wedding day circa 2015 (PC: Caitlin’s Twitter)

For a while now, Dan and Caitlin looked quite busy on their work to start thinking about having children. As of March 2020, there were not any children.

Who Is Caitlin Thompson?

Of course, Caitlin Thompson also had her filmography and thus was not just the wife of a famous screenwriter-cum-producer.

Caitlin was born on 1 July 1987 in Avon Lake, Ohio. Caitlin started her career as an actress in various short films as Cait Thompson.

In 2011, she appeared in the recurring role in ABC Family’s comedy-drama Greek. Another one of her big appearances in 2011 was in Dan’s work Crazy, Stupid, Love.

Most famously, however, she appeared in This is Us, another show created by her husband.

Her other credits include Small Shots, The Neighbors, Under the Bridge, Chapman, 90210, etc.

How Much Is Dan Fogelman Net Worth?

As of March 2020, the estimated net worth of Dan Fogelman’s net worth was over $75 million.

How Tall Is Dan Fogelman?