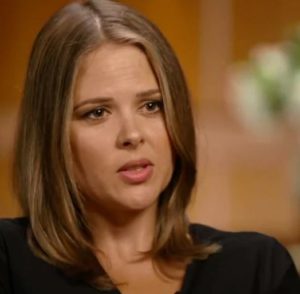 Brittany Commisso, who was known as executive assistant #1, finally dared to make herself public. She had accused the governor, Andrew Cuomo, of groping her and along with her, 11 women filed complaints against Cuomo for sexual misconduct.

Scroll down this Brittany Commisso Wiki to learn more about her.

At first, Brittany Commisso was identified as “executive assistant #1″ in the New York Attorney General’s Investigation into Governor Andrew Cuomo. She accused him of groping her. As reported, she made her first complaint to the Attorney general’s office in March 2021.

Later on, the report was made public on Tuesday, 3 August 2021. The attorney general’s office report stated that the accusations made against the governor were credible and corroborated.

The allegations included, Andrew Cuomo getting involved in the pattern of inappropriate misconduct since late 2019. The pattern included close and intimate hugs, kisses on the cheeks, forehead, and at least one kiss on the lips, touching, and grabbing butt during hugs.

While taking a selfie, Andrew also made comments and jokes about Brittany’s personal life and relationships. He also called her and the other assistants ‘mingle mamas’.

The report states, “These offensive interactions, among others, culminated in an incident at the executive mansion in November 2020 when the governor, during another close hug with Executive Assistant #1, reached under her blouse and grabbed her breast.”

For over three months, Executive Assistant #1 kept this groping incident to herself and planned to take it ‘to the rave,’ but found herself becoming emotional (in a way that was visible to her colleagues in the executive chamber) while watching the governor state, at a press conference on March 3, 2021, that. he had never ‘touched anyone inappropriately.’

Brittany then confided in certain of her colleagues, who in turn reported her allegations to senior staff in the executive chamber”. She shared whatever Andrew Cuomo did to her was a crime but he denied all the allegations.

Richard lost his mother Jane, a graduate of Milne High School and Albany Teacher’s College, class of 1942, on 28 December 2013. She also worked at the Watervliet Arsenal during World War II. His father was a marine who did a tour in the Pacific.

Her father was one of the five children consisting of four sons (John, James, Don, and her father Richard) and her aunt Sharon.

Other family members of Brittany include John Damino.

According to Whitepages.com, Brittany Commisso and her family have their current resides at 130 Cottage Ave Albany, NY 12203. She lives there with her husband and a daughter.

It seems Brittany Commisso did have accounts on the social media platforms, but she deactivated since the sexual misconduct controversy of Andrew Cuomo. The reason might be protecting her family and kids, and, of course, herself, from the harassment on the internet.

Brittany Commisso Job, Where Does She Work Now?

Brittany Commisso, before and after the Andrew Cuomo controversy, is a total mystery. But, as far as we know, Brittany started working with Cuomo in 2017, according to Heavy. All of her family members are Democrats who dedicated their life to public service.

The Albany native was hired as administrative assistant of the Executive Chamber and got paid $62,000-a-year, in 2019. Before that, she worked as a confidential stenographer for the Department of Transportation, according to the Empire Center for Public Policy’s SeeThroughNY website.

Her current work status is a mystery as of this writing.

Brittany Commisso is married to her husband, Frank Commisso Jr. The married couple tied the knots on 10 December 2016. Together, welcoming their daughter into the family further added to their happiness. 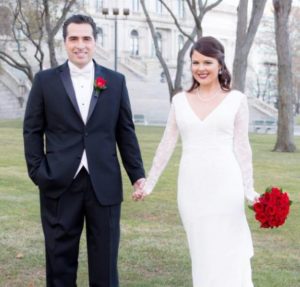 Brittany and her husband Frank Commisso together on their wedding day (Pic: Frank’s Facebook)

Frank was a former Common Council member from Albany who lost a 2017 mayoral campaign. The soon-to-be-divorced couple has a daughter who is around 6 years old. According to online records, they are in the midst of their divorce proceedings and their next scheduled court date in Albany Supreme Court is on 14 August 2021.

There were also rumors flying around related to Frank Commisso Jr. and Brittany Commisso’s divorce. However, it is yet to be confirmed.

More about Brittany’s husband: Frank attended The Albany Academics followed by Saint Lawrence University. He worked as an auditor at The New York State Office of the State Comptroller. Later on, he became the director at Albany County Department of Audit and Control.