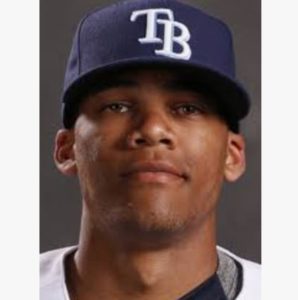 Brandon Martin earned prominence and comparisons to the greats for his potential as a baseball player. But, drug abuse, alcoholism, and psychotic behavior ruined it all for him so much so that he went as far as to take the life of three people.

While Riverside County sought the death penalty for Brandon, his lawyer claimed him to have a mental illness and shouldn’t face capital punishment. The court found him guilty on three counts of murder on 5 November 2020 but the term of his sentence is yet to be announced.

Read more, for more details on the incident.

Brandon Martin celebrated his birthday every year on 24 August. In August of 2020, he turned 27 years old.

Per his date of birth, Bradon Martin secured Virgo as his zodiac sign.

More on his family, Bradon shared his childhood with his brother Sean. Being born bi-racial, many assumed he struggled with identity.

Brandon attended Santiago High School where he played baseball. During his time in school, he earned prominence as a star athlete during that time.

In the 2011 MLB draft, the Tampa Bays Rays signed Martin as expected. He was given a $1 million signing bonus, his first earning, which added to his net worth. Everybody believed he would be counted as one of the best among the newest drafts at the time.

Not only that, but Brandon also earned $114,000 to pay for his college education when he signed to Tampa Bays Rays, as stated in his contract.

A million-dollar handed over to the young blood who knew nothing better about finances, Martin didn’t hesitate to spend money extravagantly. He bought cars for himself and his parents, rented high-end homes from the signing bonus which he earned.

He had a successful first professional career in the minor leagues. But his lavish lifestyle had no end. He reportedly paid $6,000 per month for his home in Yorba Linda.

But it was drugs and alcohol which ruined both Brandon’s life and career. He had people coming over for parties. Police responded exactly 19 times up until 2012.

Surely Brandon lived a life of excess, parties, brawls, and drugs which resulted in psychotic episodes but more on that later.

Brandon played in both minor and major leagues and halted his progression once he suffered a thumb fracture. In total, he played three seasons with the Rays’ farm team. Coming out of recovery, he started playing for Bowling Green Hot Rods based in Kentucky marking his MLB career.

With the alcoholic habit and drug abuse, Brandon’s parents couldn’t take any more of his behavior. His parents even restricted him to come home still he didn’t follow the orders.

Before the crime transpired, three people were present at the scene. Michael Martin and his brother Ricky Anderson had Barry Swanson, a technician, over to install a security system.

Regardless of the limits Brandon crossed, Ricky wanted his nephew to recover so he gave him time to get into rehab. Before the unthinkable happened at Brandon’s house, Ricky was on the phone with his son Mike Anderson.

And all of a sudden the phone went dead.

In 2015, suspicious of the situation, Mike arrived at Martin’s home to find them dead inside the house. As unfolded by the details on the court documents, Brandon first smashed the head of his father with his baseball bat and killed him instantaneously.

When his uncle, Barry Swanson tried intervening in between and got killed in a hot second right at the spot. Like Barry, Martin tried to intervene which ended up with him getting beaten by the bat and getting dragged to the garage.

Brandon was arrested the very next day after the authority chased him on foot and vehicle. He was detained with the victim’s item in possession including wallets and cell phones, and a vehicle that belonged to Barry Swanson.

While Barry and Martin lost their lives during the struggle, Ricky passed away two days after, owing to the injury he endured.

In court, Brandon pleaded not guilty and claimed he arrived at the crime scene, the way it was. However, the murder weapon, Brandon’s baseball bat with his name engraved on it, said it all.

Police arrested Brandon Martin twice for the complaints they received. Following the completion of his minor leagues, he moved to another spot but his partying habit never stopped.

The drug-infused affected his professional and personal career. He was very disrespectful towards his coaches and also failed marijuana tests which had him packing bags.

Getting back home, Brandon also got into a fight with his brother. For his behavior and substance abuse habits, he got suspended by the team till September of 2015.

And on 26 March, Tampa Bay Rays voided his contract and sent him home.

The mental health situation of Brandon got even worse when he started living with his parents. He continued doing drugs, despised his Black heritage, and fought with his parents for that.

Brandon started crossing the line when he became physically abusive. He reportedly thrashed his father who was in a wheelchair and had his mother on a chokehold and even held scissors to her neck.

Brandon’s parents reported him to the police for the abuse. He claimed to see a therapist and not taking his medications.

The authority put him for two days in a mental facility for his mental health examination. He was diagnosed with a mild case of mood disorder and drug abuse which triggered his outrages. They prescribed him an anti-depressant and mood stabilizer for well-being.

Who Is Brandon Martin Girlfriend?

A young handsome man who often received comparison to Derek Jeter, he surely attracted plenty of women. Him constantly having parties, meant one of the attendees of his splurging party must have had several women attracted to him.

However, Brandon’s romantic life never caught anyone’s attention. Fans never saw him getting cozy with his potential girlfriends and he never discussed him romantic life outside of it.

Surely we can assure he had girlfriends, but we don’t possess any strong evidence to support the statements made.