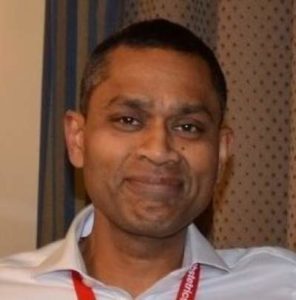 In fact, Basky is the same doctor who led the team that miraculously operated saved the couple Kyrie and Craig Peters’s twins back in Feb. 2016. The then-unborn twin boys were diagnosed with a life-threatening twin-to-twin transfusion syndrome (TTTS). Basky and his team were quick to recommend a procedure that had saved the babies.

Continue to dwell on this Basky Thilaganathan Wiki and find out how the professor and director of Fetal Medicine, St. George’s University Hospitals NHS Foundation Trust decided to be on national television.

So, Basky Thilaganathan is of Sri Lankan origin, but he received his education in Britain.

This lady with the name Dharshika Devanamby, who appears to be his relative always leaves some comments on his Facebook posts. Other than that, his family matters rested away from the spotlight.

Basky Thilaganathan could be spotted on Facebook and Twitter. At the time of this writing, his sharings on them were strictly professional.

For the past 21 years and more, Basky Thilaganathan has been working at the St.Georges University Hospitals under NHS Foundation Trust. As of April in 2020, he took on a new role of Clinical Director at Tommy’s National Centre for Maternity Improvement. He has been the Editor Emeritus of ISUOG (International Society of Ultrasound in Obstetrics and Gynecology) since Jan 2011. Lastly, he is the Professor of Fetal Medicine at Ultrasound Diagnostic Services. He has been working for the last  22 years and more.

Further, he has authored over 250 peer-reviewed publications in indexed journals. He also gave a TED Talk on “Maternal death: a century of getting it wrong” back in Dec. 2016.

Regarding education, all we know is, he is Kings College London’s alum. What’s more, he received an Honorary Doctorate (Ph.D.) from Uppsala University circa 2007.

Basky Thilaganathan, who was introduced to Channel 4 viewers during Baby Surgeons: Delivering Miracles episode 1, reportedly had to his name a net worth of above $3 million (before 2021).

Also, erieri.com had reported the average salary range for a Maternal-Fetal Medicine Specialist in London is between £183,773 and £399,432.

Again about his role in Baby Surgeons, the doctor said, “Here we treat the world’s smallest patients. We operate on babies in the womb giving parents hope and babies a chance at life“.

The show features Professor Basky and the team performing unusual surgery on babies who are still inside the womb.

The very first season of a brand new show was filmed throughout 2020. It was possible because, most of the filming was done using GoPro cameras worn by staff, temporary-fixed cameras in clinical rooms, and with video diaries recorded by the patients at home.

All in all via the TV program, Basky and his team aim to raise awareness and breaking the silence surrounding baby loss, including miscarriage and stillbirth, when in case even the very best medical intervention failed to save a life.

In fact, the show seems to have met its purpose in a short span of time. The audience has been conveying they were really touched by the effort Basky and his team put in for each patient.

Here are some of the praises, fans dropped on Twitter for the baby surgeons on the show.

Basky Thilaganathan represents the Royal College of Obstetrics and Gynaecology on the UK National Screening Committee. When he not operating or consulting his patients, he would be most probably out in nature cycling with his Penge Cycle Club friends. While such facts about him were obvious and covered by the news as well, the tales about his married life, which people were more interested in, stayed mysterious.

Online reports never mentioned if Basky is married to a wife or not. His social media is also not at all telling about this aspect of his life.

But then, this couple of times, Basky shared pictures of two girls resembling his kids.