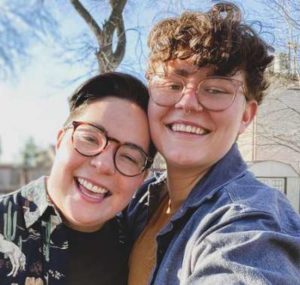 Audrey Kriss is a household name among TLC’s Sister Wives fans. Audrey is basically known for her relationship with Sister Wives star Meri Brown’s only child Mariah Brown. But there is more to Audrey other than her appearance on the reality TV drama series. Find out in this Audrey Kriss Wiki.

Audrey Kriss celebrates her birthday every year on December 29th. This makes her a Capricorn who reached the age of 25 in late 2020.

Audrey Kriss was born and bred in the city of Littleton in Colorado, in the United States. Rick Kriss and Joan Schroeder Kriss are her parents.

Her dad is on Facebook as Rick Kriss. Less is known about Rick, except for the fewer times Audrey mentioned him on her post writing — “To the dad that makes me feel better after a bad game. I love you, dad.”

Then, on Father’s Day, Audrey would always come up with something like:

“Happy Father’s Day dad! You are the greatest man I’ve ever met and do so much for me I can’t even begin to start to thank you! You are my inspiration and hero! I love you!”

Audrey also revealed, her dad has supported her through everything and that they are pretty much the same person as they both laugh at their own jokes.

Then, there is her mother Joan Schroeder Kriss, whom Audrey is equally fond of.

To Audrey, her mom is the most selfless person to ever exist. To her “mama Kriss” Audrey would often dedicate the likes of:

“She supports me through all my endeavors and even loved me when I was an “cruel devil” who screamed, and cried all the time. So that means something. I also wish I was half as cool as my mom. She’s a fun lady.”

Likewise, her siblings, according to Audrey, are by far the best. That, they are all so different with such great humor and personalities.

So, Audrey Kriss has two sisters Alyssa Kriss and Adrienne Kriss, and a brother.

Audrey Kriss, who has recently been sporting a new short haircut, stands 5′ 8″ or 1.73 meters in height.

She also could be spotted on her ‘Audrey Kriss’ where she entertained about 967 friends.

Audrey Kriss started working at her own Audrey Kriss Creative as of March 2020 — leaving her brief 6-month tenure as an Apple specialist.

And even before that for a year or two, she pursued freelance graphic designing.

In 2018, Audrey graduated with a bachelor’s degree in Marketing from Westminster College. She also went to Hillcrest High School with a Marketing Major.

Of all her collegiate golf career had been greatly covered by media outlets as well.

In 2014, Audrey was even honored with “The Outstanding Athlete Leader of the Year.”

Audrey, a self-proclaimed “queer af”, has been dating writer and radical humanist girlfriend, Mariah Brown for a while now.

Mariah made her IG debut on Audrey’s IG in March 2017.

Ever since the loved-up couple continued to express their love for one other on social media. And one fine day in July 2018, they officially moved to Chicago. On that day, they were approved for their dream apartment in their dream city and were super excited for their adventure ahead.

Before Audrey met Mariah — Mariah came out as gay in 2017. She attended Loyola University’s graduate program in social work. All along, she always wanted to join a polygamous family and be a sister wife herself (like her family members) until she started dating Audrey in 2017. Both were students at Westminster College in Salt Lake City at the time.

For a while, there were also some break-up rumors going on until Audrey shouted out to Mariah on her birthday on July 30, 2021.

Not to miss, on the Mar. 15, 2020 “Growing Up Gay and Religious” episode of Sister Wives Audrey and her partner opened up about their plans for the future, including marriage and potential children.

They discussed they have to have children on the 29th because both of their birthdays are on the 29th.

Even Mariah’s mom and stepmoms discussed the pair “definitely” have talked of having babies as there are “two wombs” involved. Then, Audrey, especially, was excited about being pregnant as they decided on having their own kids rather than adopting.

About the marriage plans, they tentatively planned to marry in 2022.