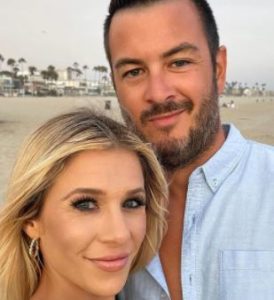 Fans of the 90 Day Fiancé may know Megan Potthast as the wife of Charles Potthast or Elizabeth’s sister-in-law. But there is much more to her than just being related to the Potthast family.

So, let’s explore her life over this Megan Potthast Wiki.

As per her birthday, Megan is of the Leo zodiac.

Fun Fact: She celebrated her 37th birthday boating and flaunting her multi-colored swimsuit out in Homosassa Springs, Florida.

Her father, Mark Sturm is the owner/operator at DMS Moving Systems (atlas van lines). He hails from Madison Heights, Michigan, and spent most of his life in Wesley Chapel, Florida. But as of 2021, he moved back to Tampa. In fact, Megan and her father were neighbors now.

According to his Facebook, Mark was labeled “single” as of 2021. So, it could be that Megan’s parents have been separated. The two were last seen together at Megan and Charlie’s wedding at Magens Beach back in November 2013.

Talking about Megan’s siblings, she has older brothers named Michael and Marc A. Sturm. Her brother, Michel is a Gaither High School and King High School alumnus who got engaged to Jessica McMullin Truax on Dec 18, 2017.

While Marc is an Eastern Michigan University graduate who spent over 11 years of his career as a general sales manager at The Suburban Collection. Also, he has been the sales manager for Les Stanford Chevrolet Cadillac and Suburban Infinity of Troy.

Aside from them, Megan’s other family members include Janine, John, and Tracey Malak Sturm

Trivia: Megan’s grandfather “Papa Jack” passed away on September 26, 2018, at the age of 87. He served the army as a corporal for many years.

Mentioning her district features, Megan has blue eyes, blond hair, and a triangular face. Also, many agreed that Megan maintained an amazing body despite her age.

Most of her posts then flaunted her swimsuit pics and her family.

Megan Potthast is a blogger and social media influencer. As for her job adventures, her Linkedin profile only stated one — an “agency director” for Barbizon USA.

Also, Megan earned herself a few bucks from her time on Onlyfans. Her profile @megpotthast wrote, “I play many roles. Top 1.1% of all creators! As seen on 90 Day Fiancé & HEA”. The subscription charge was $14.99 per month and $33.73 for three months.

Aside from all these, Megan can also be called a reality star. On 90 Day Fiancé, she was seen standing strong beside her husband Charlie, even when when he’s at war with his brother-in-law, Andrei.

Megan Potthast garnered a net worth of nearly $200 thousand by 2021. While cannot confirm what her major source of income was, we’re pretty sure she earned some from her time as a social media influencer.

Megan Potthast loved her husband Charles for over 2 decades. On their 7th wedding anniversary i.e. on November 27, 2020, Megan shared,

“Happy 7th Wedding Anniversary to the man I’ve loved for 20 years @charliepotthast. Thank you for being my rock and giving me four beautiful babies. I look forward to many more years with you by my side babe! Love you forever and always.”

But this wasn’t the only time, Megan reminded her followers that they were together for over 20 years. In fact, she even used the hashtag 20yearstogether often when it came to their pictures.

Summarizing, how they first started dating. Well, Megan and Charles attended the same high school. And fortunately, Charles was Megan’s best friend’s brother. You can imagine the rest.

As for their kids, Megan and Charles are parents of four — namely: Charlize, Jordy, Charles, and Josiah. Little info about them: