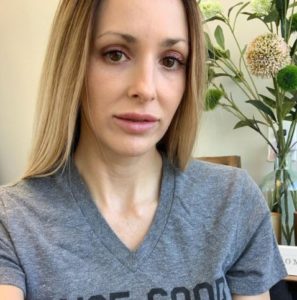 Apryl Stephenson, who is the estranged wife of Ben Youcef, appeared on social media in 2021. She shared about the bitter divorce between her and her husband Ben Youcef. Moreover, they were struggling with custody.

Scroll down this Apryl Stephenson Wiki where you could learn about Ben Youcef’s wife.

On Instagram, Apryl Stephenson goes by the name (@aprylstephenson). She gathered 338 followers and 429 posts on the platform. On Facebook, she goes by her real name where she has 1.1k friends.

Apryl Marie Stephenson (formal name Kramer) was born to her father Dan Stephenson in her hometown of Murrieta, California.

No information surfaced on her biological mother. Dan Stephenson and Beverly, whom Apryl calls her mom, married in August of 1992. They celebrated their 29th wedding anniversary on 9 August 2021. Dan attended the University of Southern California. He is the owner of Rancon Group.

Apryl has at least two siblings, her sister Gretchen Stephenson Petersen. Gretchen was married to Eric Petersen but lost him on 11 December 2018. Besides his wife, Eric left behind, three children Greysen, Harper, & Brody.

And, April has a brother named Darryl Stephenson who married Sonia Petrovski Stephenson.

Apryl had started her professional career at RNF Media where she worked as a Traffic coordinator. She worked there for a year and three months. Then in October of 2001, Apryl started at Clear Channel Outdoor where she became Sales Co-ordinator.

From 2002-2005, Apryl served as a resource manager for Integrated Data Systems, Inc. She worked for the company for 3 years. Moreover, she joined Online Resources Corporation as a resource manager from 2005-2013. Her job specifications included getting recruited as a key member of the divisional management team, leading the development of a comprehensive monthly financial reporting package, mine detailed data across multiple business verticals to provide accurate metrics for revenue and sales growth, labor utilization, as well as detailed analysis of current data against past forecasts and budgets.

From 2013-2014, Apryl served as a senior business process analyst for ACI Worldwide. From 2014-2017, she served as business operations manager for Alkami Technology. However, her career as a realtor only began in August of 2017.

In 2019, Apryl became the top listing one of the top three real agents for Rancon Real Estate.

Apryl Stephenson and Ben Youcef have been married on 7 June 2015. Together they had, five-year-old twins, Hannah and Harris (born on 21 December 2015). The married couple separated but, the divorce is still pending, according to a source revealed.

After three years of marriage, Apryl filed for divorce for legal separation in July 2018. Then, on 7 January 2020, Apryl filed for formal separation dismissal and divorce on the same day. Dan and Beverley, Apryl’s parents, submitted the court testimonies accusing Youcef of failing to set boundaries. They also added that he wasn’t being a responsible parent when it came to their children’s hygiene.

They labeled him more of a ‘playmate’ than a parent.

Beverley had claimed that her daughter’s marriage had severe problems from the very start. Ben also never lived permanently in the marital house in Murrieta. Her mom noted that Ben was little assistance to Apryl in caring for the children other than holding them.

After having the twins, Ben and Apryl never lived together as husband-and-wife. Ben had his own 2-bedroom-2-bathroom rent-controlled apartment.

Apryl also knew about the relationship between her soon-to-be ex-husband, and his new partner Sandra Lee. She wished the new relationship the best of luck and acknowledged the divorce.

A friend of Apryl, however, accused that, Ben was an opportunist. They said, Ben craved the attention for a very long time and he got it, which he must be enjoying. A few months before, Ben proudly shared that, he was dating a “celebrity.”

They also claimed that Ben has his own agenda while talking to Daily Mail.

Besides Hannah and Harris, Apryl also has two twin sons, Hudson and Holden who turned 12 years old on 9 September 2020 from her previous relationship. The ex-parter is only identified as Mr. Kramer, and no details surfaced on him. Allegedly, the only person who was on the contact list was Kramer was Darren Kramer, so she could be her ex-husband.

More From Us: Kwame Ferreira Wikipedia: Parents, Net Worth, Height