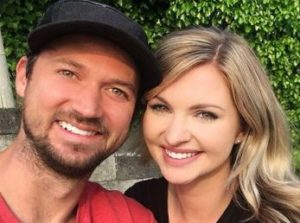 Congratulations are for Alyssa Ingham and the content creator and actor behind Blippi, Stevin John. The two finally got engaged on August 2021, after enjoying over 6 years of dating bliss.

But how much do you know about Stevin’s new finance? Well, if the answer is “not much” then stay with this Alyssa Ingham Wikipedia to learn all about her.

Corresponding to her birthday, Alyssa is of the Virgo zodiac.

Trivia: Alyssa celebrated her 26th birthday at a Bon Iver concert (The Gorge Amphitheatre) with her sister, Erin.

Alyssa Ingham comes from a family of four. She grew up in Auburn, Washington alongside her sister Erin Chamberlin, and her parents Susie (Pries) and Dave Ingham.

According to Alyssa, her dad is a punctual, weird, and soulful man. He is also a great cook and music lover, she added. As for her mom, Alyssa doesn’t talk much about her. But looking at her FB profile @susie.ingham, we could see that Susie loves hunting.

As for Alyssa’s sister, Erin is an Auburn Senior High School graduate who went on to study “Special Education and Middle School Science” at Central Washington University. She then ventured into the real estate business with her husband  David Chamberlin and even had their joint agent account called, David & Erin Chamberlin.

Mentioning her distinct features, Alyssa has blond hair, a triangular face, and she has the same eyes color as Stevin, i.e. hazel.

Most of her posts then featured her travel adventures, her fiancee, and their terrier dog named Lyno.

In 2020, they also added a new member to the family a rescue boxer-pitbull mix named Lily.

Alyssa Ingham is a communications manager who worked at Kideo Productions, Inc, a company working to create educational children’s content for a multicultural audience. Reportedly, she joined Kideo back in Jan 2018 and was still working there as of 2021.

Besides that, Alyssa has worked jobs as a barista at Java Junction, and bartender at The Palace Cafe. Also, she has been employed at the Black Diamond Bakery, and  Grapes and Crepes restaurant.

From Sept 2015 to Sept 2017, Alyssa was also the youth activities coordinator of AmeriCorps — responsible for developing, implementing, and evaluating programs for youth at the Stan Bassett Youth Center’s after-school drop-in program for 3-8th grade students.

In light of her education, Alyssa graduated from Auburn Senior High School in 2011 and went on to study Bachelor of Arts, “psychology and family studies” from 2015 to 2017. She graduated with a 3.5+ GPA and made it to the Dean’s list.

Alyssa Ingham garnered a net worth of around $350 thousand by 2021. Likewise, her future husband Stevin then flaunted a stunning $16 million net worth.

Just in case you are curious, Alyssa’s job as a communications manager in Seattle, WA, (averagely) made around $90 thousand per annum.

Alyssa Ingham and Stevin John formally started dating back on June 15, 2016. Since then, the two have moved across the country (twice) and traveled around the world together.

Finally, after 6 years of sharing adventures, the two then got engaged in August 2021. The engagement took place in Malibu, California seashore.

Sharing the good news both Alyssa and Stevin posted engagement pictures over their respective IG. Alyssa wrote, “2015-forever I love you @stevinwjohn”, while Stevin captioned, “I got upgraded from boyfriend to fiancé!”

As for their thoughts on their wedding, the couple remained silent as of 2021. However, back in 2018, Stevin shared over an interview that he would maybe want kids of his own sometime “down the road.” So, guess we’ll be hearing the news about their kids sooner than their wedding.

Little info about Stevin John: He is the mastermind of the children’s educational YouTube channel Blippi which has earned more than 10 million subscribers. In addition to that, Stevin also ran a secondary channel, Blippi Toys which garnered over 7 million subscribers as well.