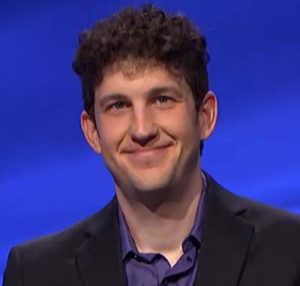 Matt Amodio is a fan-favorite among Jeopardy! viewers.

The newcomer on America’s favorite and longest-running quiz show has swept the competition and is currently on a winning streak. Recently, i.e. on Aug. 3, 2021-episode of the show, he made history earning his place among the top ten total cash winners of any contestants in regular-season play.

So now that you have seen his smart use of daily doubles present him with runaway wins in several games, let us take you through Matt Amodio Biography where you may also understand his Jeopardy! career, married life, age, job, and more.

On Aug. 2, 2021, Matt Amodio won his tenth consecutive game ending up with $362,400 total winnings so far. Then, in the following episode of Jeopardy!, he was expected to move on to compete as the reigning champion.

Matt grew up watching Jeopardy! religiously with his parents. But he auditioned for the show at the behest of his parents, especially his dad.

And again, even when he tried, he only did it reluctantly because he did not think he would make it, and that even if he did make it he thought he would not be very good.

Never in his wild imagination, had Matt deemed to become one of the top Jeopardy! earners to date. He had brought in a whopping $310,400 in winnings before Aug. 2021.

Thus while Matt was not expecting even a single game win, he already won five in a row. And now, looking back, he believes, winning the Jeopardy! challenges are almost addictive.

Matt loves to watch him on the recorded Jeopardy! episodes on TV with family and friends.

That been said, the new realm of fame also came at the expense of his personal life and privacy. And with it, some criticism. Matt sparked outrage online for how he answered his questions on the show. The thing is, Matt’s replies to every prompt, be a subject is a person or a period of time, have always started with, “What is …”. This incorrect use of pronouns outraged many viewers.

To this, Matt simply said he meant no disrespect and no harm.

“I live and breathe the show, I love every aspect of it, and so I’m definitely not doing it out of any disrespect or undermining of the show.”

Then, the show’s official Twitter account also clarified for its viewers that despite all there is nothing wrong with Matt’s answers and that they are totally within the rules of the game.

Matt and his siblings were born and brought up in their hometown in Medina city.

Over the course, in pursuit of a career and better opportunity, Matt has been calling New Haven city in the U.S. state of Connecticut his home.

Then, he could also be spotted on his ‘Matt Amodio’ Facebook.

As per his LinkedIn, Matt is a research assistant at Yale University. The detailed description on the site also read — Matt is getting his Ph.D. with a focus on Machine Learning and Artificial Intelligence. He is interested in data-driven decision-making and always looking for challenging problems to solve. And that, in his professional experience Matt has built predictive models for massive data sets in fields such as social media networking, natural language processing, geospatial routing, cybersecurity, and computational advertising. What’s more, when Matt is not working, he is doing the same for baseball data.

So, to put it simply, Matt in his day job studies neural networks as a Yale computer science Ph.D. student.

Matt Amodio is a 2009 graduate of Medina High School, a graduate of The Ohio State University, and a fifth-year Ph.D. student in Yale’s current computer science program studying artificial intelligence.

Before Matt Amodio took an online test, auditioned for the show in New York, and first appeared on Jeopardy! on July 21, he had above an estimated $700K net worth.

Matt Amodio even revealed his strategy going in the Jeopardy!, lessons that he learned from the legends, Ken Jennings and James Holzhauer. But, he, seemingly, believed he is not required to address his fan queries on if or not he has a wife or a girlfriend.