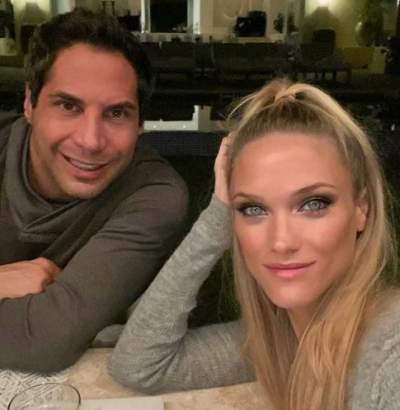 After the reports claiming Joe’s 2020 arrest in Mexico were out, people have been more than ever interested in his personal life.

Abbey Wilson is a model and reality TV personality who gained fame from her appearance of VH1’s Couples Therapy with her then-boyfriend Joe Francis.

Further, it seemed her siblings are sisters, Alison Spurlock(Wilson) and Ashley Wilson.

Abbey Wison stands to a height that is 5′ 8″ (1.73 meters). Also, her measurements were lately listed as 35-25-34 inches. Her social media have enough evidence to show how aware she is when it comes to staying in shape. Just two years after being a mom she returned to her old self with pure pressed green juices and working her “butt off in the gym”.

The Wilhelmina model landed fame first from her ‘Girls Gone Wild’ win and afterward for dating the very brand’s founder and creator Joe. (Joe reportedly had $25 million net worth at the time.)

After “Search for the Hottest Girl in America”, Abbey appeared in several other franchises of the TV series. IMBD credited her also as the host of Gone Wild: Hottest Photo Shoots, Girls Gone Wild: Blondes vs Brunettes, Girls Gone Wild: Sexiest Bodies, and Best of Search for the Hottest Girl in America. The next year (2013), she was seen in an episode of Entertainment Tonight and a total of 10 episodes of Couples Therapy with Joe Francis.

It’s surprisingly unclear if or not Abbey Wilson and her entrepreneur and film producer beau ever got married.

They started dating in 2012 after Abbey notably won the Girls Gone Wild‘s “Search for the Hottest Girl in America” contest.

The next year, Abbey’s iPad that had private sex videos of them was stolen. But they stuck through it and in 2014, Abbey became pregnant with twin daughters and welcomed them (Alexandria Claire Francis and Athena Olivia Francis) on Oct. 7, 2014, via in vitro fertilization. Joe, of course, was the father.

The couple continued to be together and seemed to be doing the parenting roles just well until recently Abbey hinted Joe nearly killed her.

She took to Instagram to write—”My children were taken yesterday from the person who nearly killed me and was released after 4 months in jail. The truth will prevail. #HELP”— on May 30, 2021.

We knew she was hinting at Joe because recently it was revealed, about Joe’s last year’s arrest in Mexico. Reports claimed he was also charged with domestic violence.

He was accused of grabbing a woman by the neck and spitting at her to give her COVID-19, a day after he was reportedly caught with the illness. The incident occurred on Aug. 1st, 2020, he was arrested on the 13th and released shortly on Sep. 8, after Joe allegedly “issued her forgiveness.” It is said, the charges were dropped on the condition that Joe attends six months of psychological therapy, which police claimed he has completed, reported the Sun.

But, a day after this news circulated i.e on June 6th, 2021, Joe released a statement on his Instagram that read:

“Don’t believe the lies. Any pissed off ex girlfriend can sell story anonymously to anyone she can. It is all lies. But I’m going to sue the fuck out of everyone who publishes these lies. I’m coming for you!!! I NEVER EVEN HAD COVID ! #fakenews”

And the following day, he shared a photo of his and Abbey’s two daughters adding “I love my princesses and they love their daddy. #daddysgirls” in the caption.

Abbey Wilson and Joe Francis spotted with their girls on Oct.23, 2019 (Abbey’s IG)

Back in Sep. 2009, The Gossip Cocktail had exclusively covered the news of Abbey Wilson getting engaged to Taylor Mosher. This happened a month later after Joe Francis allegedly grabbed Abbey by the face and kissed her on the lips against her will in front of Taylor Mosher.