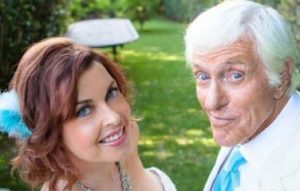 Age is just a number when it came to love. The professional makeup artist, Arlene Silver married her 46-year older husband Dick Van Dyke back in 2012, and there has never been an issue in their relationship.

Recently, Van Dyke was recognized during 2021’s Kennedy Center Honors; and his wife, as always, was there to cheer for him.

So, who is she? Follow this Arlene Silver Wikipedia to learn all about her.

Corresponding to her birthday, Arlene is of the Virgo zodiac.

Interesting Fact: Arlene was only 3 when Dick Van Dyke was 49.

Arlene Silver’s parents have divorced a long time ago. After the split, she lived with her mother, Mary Stout who worked at the City National Bank in California. She later went on to marry, Michael Stout (Arlene’s stepfather).

As for Arlene’s mother Mary, she was a 77-year young woman as of 2021. A Huntington Beach, California native, Mary celebrated her birthday on October 18th.

Over IG, Arlene shared that her mother was “an impossibly strong and kind angel” that she was “so proud to call Mama”.

Also, in one of her other IG posts, Arlene mentioned that her family moved to California back in 1981.

Talking about her siblings, Arlene has an a-year-older brother named John Silver (birthday: October 31). He is a Bronx, New York native who later moved to Costa Mesa, California.

Trivia: Arlene had a crush on Greg Evigan, the nephew of her mother’s boss.

Mentioning her distinct features, Arlene has blue eyes and a comparatively smaller nose.

Her posts then were filled with vivid pictures of herself, cats, raccoons, and especially, her husband.

Arlene Silver garnered a net worth of above $5 million in 2021. Likewise, her husband Dick Van Dyke flaunted a stunning net worth of $50 million then.

A professional makeup artist by profession, Arlene has worked as an esthetician for over 15 years. In June 2011, she left Lucas Echo Park after almost 5 years of service, and before that, she was working as a makeup instructor at El School of Professional Makeup.

Also, she has been a producer for XM Style, and office manager for Stoney Road Productions.

In light of her education, Arlene attended Califonia State University-Fullerton from 1997 to 1999 for a Bachelor of Arts, Communications/TV-Film degree.

According to the public state records, Arlene was no longer a licensed esthetician in California as of 2021.

Arlene Silver married Dick Van Dyke in 2012, and they had two wedding celebrations that year. The first was on February 29 — a low-key, intimate event in  Van Dyke’s home at Malibu. While the second one was a grand wedding on September 8, 2012, which was themed “seafoam circus.”

So, how did they first meet? Well, it was at the SAG Awards in 2006. Arlene confessed that although she didn’t know much about Van Dyke when he approached her in the green room. They then immediately became friends, and later, Van Dyke hired her to do the makeup for a couple of his movies. The rest is history.

Overall, Arlene named her relationship to be a “fairytale” — with her husband as the “prince.” Also, she added that they both were “immature but in a good way”. And we don’t doubt it! Often over socials, we have seen Arlene dancing by her husband or just making a hilarious TikTok with him.

Did you know: Before Arlene, Dick was married to his first wife Margie Willett from 1948 until 1984, and they shared four children, namely, Christian, Barry, Stacy, and Carrie Beth Van Dyke.

So, they are Arlene’s only kids now. As of 2021, Arlene and Dick had no children together.