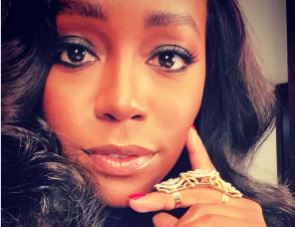 The How to Get Away with Murder star, Aja Naomi King is expecting her “Baby King”. On March 12, 2021, Aja took it to her IG to reveal the baby bump, and shared it was her “beautiful little rainbow baby”. Also, she took the time out to write a long caption about her “pain” and “fear”, following her two previous miscarriages. But she “believed” this time, the baby would be “okay”, and her “gift will remain.”

Meanwhile, while empathizing with Aja Naomi King, her fans were also curious about her baby father — Was he Aja’s boyfriend or husband? Or was he even in her life? Stay till the end to get all the answers.

Aja Naomi King’s parents (married for over 37 years by 2020) hail from New York and New Jersey. Her mother, Theresa Moore King worked as a line producer all her life for productions like Netflix, Dick Clark, Disney ABC Television, NBCUniversal Television, Shed Media, and more. According to Aja, her mother taught her “how worthy” she was.

As for Aja’s father, she shared that he taught her “that strength comes from leading with love, loving oneself and loving others”. He always supported her, and he was also Aja’s date for BET Awards 2016.

Aja Naomi King grew up in a “suburban neighborhood” alongside her siblings Chenel and Miya King.

Her sister, Chenel is an educator and a writer. She wired as an instructional assistant at Otis College of Art and Design in 2021. As for Miya, she is a songwriter, and producer. She was associated with Black Jazz LLC for over 6 years, and also worked as a freelance media manager and a voice teacher.

An actress at heart, Aja always knew what she wanted to be. So, she went to the University of California to receive her bachelor’s degree in Fine Arts. Later, she further improved her skills at Yale University’s School of Drama and received a master of Fine Arts degree.

Aja Naomi King was always private about her love life. In 2021, as she was expecting her baby (following two miscarriages), fans were hopeful that she would finally reveal her boyfriend or husband’s name, but Aja remained tight-lipped.

So, we took the matter into their own hands in search of her baby father. According to HITC, rumors had that Aja was involved with a fellow How to Get Away With Murder star Alfred Enoch in 2017. However, neither of the co-stars admitted to having dated one another; but neither denied it.

Upon further speculation, Aja and Alfred have posted about one another several times in the past. However, they stopped after a certain time. So, this still opens the question if Alfred was ever Aja’s boyfriend, and were they still dating the time Aja got pregnant? If so, we can be pretty sure that Alfred was the baby daddy.

Beyond the social media posts, Aja protested together at the Women’s March. They even met up with her family in the United Kingdom. Alfred was even Aja’s date at the Essence Black Women in Hollywood gala.

If you don’t know who Alfred Enoch is, he is a British actor popular for his role as “Dean Thomas” in seven of the popular Harry Potter movies. Also, you might know him as “Wes” from How to Get Away with Murder. He is four years younger than Aja. 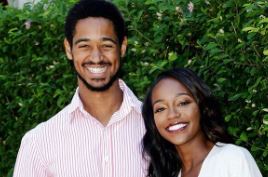 Aside from Alfred, many were also confused if Jack Falahee could be Aja’s boyfriend, as they were rumored to be dating at a time. But lets us be the one to burst your bubble, No Jack wasn’t Aja’s boyfriend. Because at the time, he was in a  relationship with Ellie Satter.

So, this just left Alfred Enoch as Aja’s possible baby father, and boyfriend.

On 6th June 2021, Aja announced the arrival of her first bundle of joy via Instagram. However, she didn’t give out details about her newborn child including the name, sex, and the date the baby arrived.