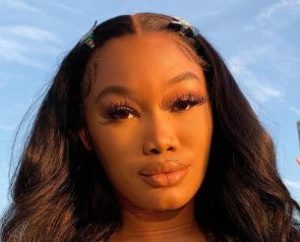 The Instagram sensation, Zelie Timothy looked like she was finally ready to let fans take a peek into her love life. In March 2021, she took it to her IG to share a video with the American singer, songwriter, Tyrese Gibson in her arms. Her caption read, “What’s understood does not need to be explained.” Guess, the two have a surprise in store for us.

So, until then, let us take a look at Zelie Timothy’s private life over this wiki.

As per her birthday, Zelie is of the Leo zodiac.

Her hometown is La Domenica, Hato Mayor, and is of Dominican nationality.

She always wanted to be a free bird. At the age of 18, Zelie even wrote over her modeling profile that she was willing to leave her family behind and relocate to pursue her career. Soon after, she moved to Jacksonville, FL, and in late 2019, she made her way to Atlanta, Georgia, where she was living in 2021.

Fun Fact: Zelie might be from the Dominican Republic but she doesn’t speak Spanish.

Zelie Timothy is a brown-eyed beauty who stands tall at a height of 5 feet 7 inches and weighs under 62 kg (136 lbs).

Talking about her plastic surgery, Zelie received a breast augmentation in 2020 (which she documented on her YouTube channel in detail). The video featured Zelie’s live surgery, follow-ups, and augmentation reveal.

Also, she had a self-titled Youtube channel with 3.9K followers then.

Over her socials, Zelie mostly shared her sensational modeling pictures, and a few beauty and fashion tips.

A self-defined “Influencer, Host, Model, and Entrepreneur”, Zelie seems to have built her career all-around beauty and body care. Before 2021, she was working as a brand ambassador for various women’s products and endorsed companies like BOOMBOD, and Flat Tummy App.

Riding her popularity wave, Zelie even started her false eyelash company called The Lash Mansion in 2019. The company claimed to supply “Handcrafted, Non-detectable lashes”, and entertained 5K followers over IG, as of March 2021.

Apart from this, Zelie also earned enough from her Onlyfans account @fansloveszelie. Her monthly subscription cost $28.99 per month then.

Trivia: Zelie’s modeling profile over “modelmayhem.com” mentioned that she shot no nudes.

Zelie Timothy And Tyrese: Dating, How Did They Meet?

Zelie Timothy and Tyrese first introduced each other to the world in March 2021. A day after Zelie posted a video of her kissing Tyrese who was in her arms, Tyrese also took it to his IG to share a video of them attending the NBA All-Star game in Atlanta.

However, the two had yet to make their relationship official then. As they talked nothing about their dating life, their first encounter remains a mystery to us.

Zelie’s introduction in Tyrese’s IG was made four months after his split with his ex-wife Samantha. Reportedly, they were married for over 4 years and shared a daughter named Soraya.

“Happy Happy Happy Anniversary!!!!!! Magic Magic and more magic….. Dear Samantha this was supposed to be us…. remember the franklins was our marriage GOALS!!!!!!!!!!!! Smiling smiling……. I’m gonna get her back watch me! [ I think ]”

Before Tyrese, Zelie was in a relationship with a guy (name not shared) until early 2020.

About Zelie Timothy Daughter, Is She Bisexual?

Zelie Timothy is a proud mother and shared that she has a daughter who turned 8 in 2021. She even named one of her products “Za’riah lash style” after her daughter’s name Za’riah.

Yes, Zelie Timothy is bisexual. Over the interview with “Southside Dash Radio”, dated Jan 25, 2020, Zelie confessed to it.