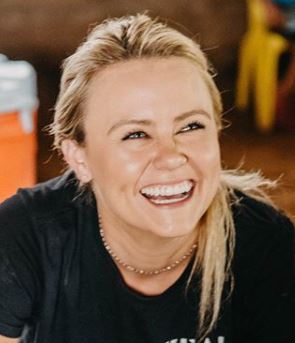 The Voice season 17 winner, Jake Hoot got engaged to the love of his life, Brittney Hoyt in September 2020. “She lost it!”,  Jake shared in an interview about surprising Brittney with the proposal.

The engagement and the subsequent nuptials not only startled Brittney but also got the fan’s attention diverted towards her. So, here we are shedding light on Jake’s wife over this Brittney Hoyt wiki.

Brittney Hoyt was born on September 20, 1991. This made her 29 years of age in 2020; 3 years younger than Jake Hoot. Corresponding to her birthday, Brittney is of Virgo zodiac.

For her 32nd birthday, Jake took it to Instagram to share how grateful he was for her. He wrote,

“Happy Birthday to my best friend! for the last 6 months, you have not only loved me and Mace unconditionally, but you have made me a better man and dad.”

Brittney Hoyt grew up in her hometown, Casa Grande, AZ in a big family. She has 6 siblings named Joseph, Jordan, Joshua, Briley, Briauna, and Jonny.

As for her parents, Brittney was born to her mother, Vicki, and her father, Tim Hoty. Reportedly, Tim worked as a Chiropractor at Casa Grande. According to Jake, Brittney kept her family as the top priority. Thus, he arranged a surprise engagement by flying everyone to the event.

Did u know: Brittney is also a devout Christian.

Taking about her job, Brittney Hoyt is a nurse who she practiced as a Labor and Delivery Nurse in Nashville, TN. Also, she is the founder and director of international missions for Zeal Global at Zeal Church, as well as the Founder and Director of The Radiant Initiative.

Brittney started her career in 2013, as she embarked on her first medical mission to Nicaragua. Over the trip, she was inspired to build bridges between communities in the United States and countries overseas.

Soon Brittney returned to Nicaragua and aimed to rebuild devastated communities and to help the underserved with tools of economic and personal empowerment.

Furthermore, she is a leader and pioneer in both the medical and mission fields. Reportedly, Brittney led several delegations, built many homes, and invested hundreds of thousands of dollars in targeted communities.

Apart from this, like Jake, Brittney is also blessed with a beautiful voice. She was seen dueting with Jake on various occasions and aspired for recognition in the music industry as well.

Just in case you are curious, the average salary of a Labor and Delivery Nurse in Nashville, TN was around $68,500.

In light of her education, Brittney attended Central Arizona College and later Grand Canyon University for her degrees in nursing science. Also, she went to the Bethel School of Supernatural Ministry.

From us – Shaifali Puri Wiki: Who Is Aasif Mandvi’s Wife? Her Age

Brittney Hoyt and Jake Hoot first met as wedding singers at their best friend’s wedding in 2013. However, they went their separate ways and again brought back together while doing missions in Nicaragua.

Jake shared that he knew from the time when they reconnected in Nicaragua that Brittney was the one. He added— ″Her heart for others and love for God made me fall in love with her. I’m so glad God blessed the broken road that brought us back around to each other numerous times!″

Also, Brittney felt the same way about their re-encounter. She mentioned that she “always loved many things” about Jake. In her words— ″This time in Nicaragua it was as though the blinders fell off my eyes, he was the right person, right time.”

After seven years of dating, Brittney and Jake got engaged on September 29, 2020. Both took it to Instagram to share the happy news with pictures from their private engagement.

The duo mentioned that they were excited about their wedding and having children together. But Brittney and Jake were already blessed with a kid from Jake’s previous relationship. Jake has a daughter named Macy who was 5 years of age in 2020. Also, Brittney and Macy were closed to each other.

On 7th March 2021, Brittney and Jake tied the knot at Saddle Woods Farm in Murfreesboro, Tennessee. Her friend, Jacelyn masterminded the beautiful wedding.

Besides the traditional wedding vows, Brittney and Jake also wrote one another vows for Macy, Jake’s daughter. Also, during the vows, the famed single sang a song titled “Hallelujah”.

On the big day, Brittney wore dresses provided by Adrianna Papell. She and Jake picked his song “And Then Suddenly” for their first dance. Meanwhile, the newlyweds traveled to Cancún, Mexico, for their honeymoon.

Before you leave – Iva Colter Wiki: Who Is Mike Colter’s Wife? + Net Worth