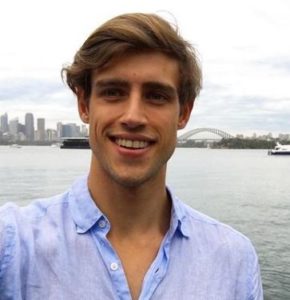 Zac Stenmark is the one-half of Australian modeling twin- duo. He was captured kissing with West World actress Tessa Thompson in May 2021. While his career has been as clear as a crystal, his romantic life remains a mystery.

So, delve into this Zac Stenmark wiki where we discuss life, career, family, and details on girlfriend about the Australian model.

Zac Stenmark turned 29 years old in March of 2021. He celebrates his birthday on 16 March which is the same day as singer Jhene Aiko. Furthermore, Zac is a Pisces by zodiac sign.

Zac Stenmark was born to his father Damien Stenmark and his mother Susie Stenmark in his hometown of Sydney, Australia. Damien.

A native of Wagga Wagga, Damien attended and graduated from Riverview College followed by UTS Sydney from where he earned his bachelor’s degree in business.

Damien was the founder of The Stenmark Organization, Australia’s leading independent national media representation company. He also served as the board member of Basketball Australia & the Australian Rugby Legends.

As for Susie Stenmark, she was a former model.

Furthermore, in his family, Zac grew up with his brother Louis Stenmark, his twin brother Jordan Stenmark born 8 minutes after Zac, and a sister Zoe Stenmark who is the eldest among the Stenmark siblings.

More about the siblings: Zoe worked as the digital director for the revolutionary online donation hub Donate Planet. She also worked with private clients on both fashion and interior styling projects. She graduated with a bachelor’s degree in Arts and Science from Sydney University in 2010.

As for Zac’s brother, he was an athlete who competed in Australian All School athletics championship in Adelaide. He ran 400 meters in May 2014 where he clocked in an amazing 47.58 seconds to win the Sydney GPS title. He was placed third-best in the world at the time.

But, he was torn about pursuing a career in basketball, athletics, and modeling.

According to IMG Models, Zac Stenmark stands tall at a height of 6 feet 3 inches (1.9 meters). Plus, he has a shoe size of 11 US. All of the Stenmark siblings are blessed to become a model all thanks to his stunning parents.

Since most of the time, the Zac and Jordan worked together as a model so they created a joint social media platforms. The joint Instagram of the twins gathered 199k followers as of May 2021. But, Zac also owns a personal Instagram account that earned 12.2k followers.

He could also be discovered on Twitter with 538 followers.

Talking about Facebook, Zac earned 201 followers. However, he hasn’t updated the account since November of 2016. In the same way, the joint Facebook page of Zac and Jordan gathered 13k followers.

More From Us: Kevin Clark Wife, Girlfriend, School Of Rock, Net Worth

Not necessary to state, but Zac Stenmark will with at least $1 million once he inherits his share.

Zac Stenmark was born with impressive genetics that he could either pursue athletics or modeling. While in high school, he gained fame as an athlete. He continued to pursue it until when he was in the University of Sydney studying economics where he pursued (Australian Football League) AFL Sports scholarship.

However, Zac, along with his brother, gave up the potential career in AFL to become a model. While in the university, they worked in a cafe and a friend suggested they pursue modeling. They launched their career with a 60-page international editorial with the prestigious L’Officiel Hommes Paris.

Zac and his twin brother Jordan were flown to London to meet Tom Ford. They made the runway debut in 2013 when they opened and closed the prestigious Calvin Klein Spring 2013 in Milan Fashion Week.

After that, his career boomed and Zac went on to feature on a campaign of Abercombie & Fitch, and Ralph Lauren. He and his brother were also featured in GQ, Vanity Fair, Vogue Hommes Japan, Apollo Magazine, and Hercules.

He appeared on Vogue Australia with Jordan along with their younger brother Louis on April 2016 cover shoot. They also graced the page of How To Spend It magazine.

The twin also made it to the cover of GQ with their Kylie Minogue.

Apart from modeling, they also worked aside a renowned scientist Dr. Stafford W. Sheehan to invent neuroscience-based eyewear named Dreamers to help people sleep better. The invention was the outcome of personal experience that they had from working long hours and not being able to sleep.

While Zac was focused on marketing and creative work, his brother Jordan was focused on finance and logistics. They also took the help of their sister Zoe who was a digital and styling expertise.

Together, the twins also launched their nutrition and fitness program named Stenmark Fit.

In September of 2018, The Stenmarks made headlines by selling their Mosman property for $11 million. Immediately after, their parents purchased another for $7.5 million. Reportedly, the property was purchased by Foxtel CEO Richard Freudenstein with his wife Jane.

Zac Stenmark was captured packing on the PDA with West World actress Tessa Thompson in Sydney, Australia in May 2021. They were strolling together and keep their hands off each other.

At one point, Zac was lifting Tessa’s sunglasses off her face so he could look close into her eyes. Apparently, she was in the town for the Marvel movie Thor: Love and Thunder. But all of it happened the same day, she was caught on the lenses getting cozy with singer Rita Ora and director Taika Waititi. 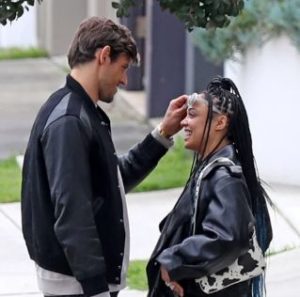 Zac and Tessa together in Sydney (Pic: BACKGRID AU)

No relationship of Zac has turned heads as of this writing on 27 May 2021. However, it’s not like, he hasn’t discussed his type publicly. Back in 2016, he opened up about his type and stated the first thing that he looks for in women is personality. Zac was interested in the one who was kind and caring.

Hailey could be a good match for Zac as she’s well-known for her devotion to Christianity, even attending a Hillsong concert during her time in Australia. Before Justin Bieber and Hailey Baldwin got married, her name was dropped alongside Zac a few times before.

But, Zac had previously confirmed he was single.