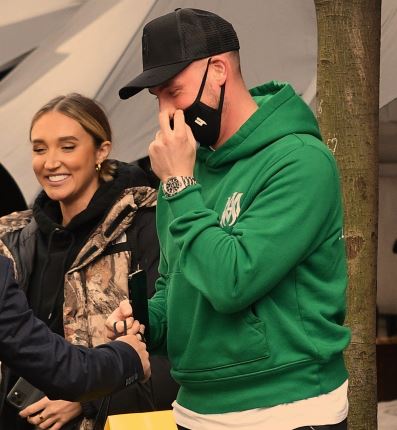 It is true, the British television personality and singer Megan McKenna is back with her Ex.!

Early in May 2021, she and her businessman ex Josh Riley were spotted on a proper first date since the lockdown ended.

Here’s more you need to know about 2019 The X Factor: Celebrity-winning Megan’s old-new man over this Josh Riley wiki.

Josh had reached the age of 28 sometime before Apr. 2021. At the time of this writing, this birthday and zodiac sign was unknown.

Josh Riley is a British national currently (2021) based in London.

Growing up, he worked as a plumber with his dad. And, this was the only story we could tell about his childhood for now.

Josh Riley, in his muscular and well-tamed physique, is above 5’11”. Recently when Josh (in a green hoody and jogging bottoms) was found on a dinner date with Megan, he somehow towered over the Ex on the Beach star who about her height had revealed, “I’m 5ft 6, but yeh it probably the heels that make me look really tall haha”, in the past.

Before May 2021, Josh Riley could not be spotted on social media platforms. His co-owned clothing brand YELIR WORLD, however, had its business accounts on Instagram, Twitter as well as Facebook. On Instagram only, they entertained over 112k followers.

It was reported before May 2021 that Josh Riley had managed to save almost $3 million net worth.

Early in 2021, BusinessLive reported how Josh and Joe started “from nothing” in 2018 to launch their now-international firm, and that in 2021 they will be turning a profit of around £9 million. The brand has been featured in the likes of GQ.

Both Josh and Joe made their fortune selling clothes worn by Liverpool and Everton stars. (Not long ago, Joe notably used his profits to buy his parents a house.)

Talking to the Liverpool Echo, Joe said how all the unique designs at Yelir World are inspired by his and Josh’s journeys across the globe. He went on to describe their partnership saying,

“Me and Josh are very different people, but when we get together to design we just come up with the same ideas. We never really look at other brands, we just design what we know, what we like. We still mainly sell to the UK and Europe, so we are careful that any designs we have are something people here would want to buy.”

Joe tried to set up the company twice before, but it had never been the right time until he met Josh.

Anyway, Josh traveled the world and did many different jobs before Yelir World happened. He was a plumber with his dad before he became a personal shopper, then one of the first on Instagram.

The latest clothing and accessories including luxury men’s t-shirts, tracksuits, hoodies from Yelir World are available on the brand’s website, yelirworld.com.

Josh Riley And Megan McKenna: Dating, How Did They Meet?

Josh Riley and Megan McKenna separated in 2020 and Megan even availed herself to dating again joining the exclusive dating app Raya before getting back together with Josh.

The first time in 2021, the duo was spotted in February as they took Megan’s beloved pup, Daisy, out for a stroll.

A source close to the couple had then told The Sun that “Megan and Josh quietly got back together – they’ve been enjoying each other company again throughout lockdown and realized what they had lost – now they couldn’t be happier.”

Then, in May, they were seen for the second time in public. The pair headed for dinner in central London on May 1st, 2021, and appeared all loved-up in their cocktails and sushi date. They smiled throughout their meal and conversation as they dined al fresco. And of course, they left the restaurant holding hands! Before this, they also enjoyed a bit of shopping in high-end department store Selfridges.

Megan, who failed to find romance on the 2019 series of Celebs Go Dating, is reportedly ‘smitten’ with Josh.

Previously, the duo started dating circa summer 2020 and had confirmed the relationship in Aug. 2020.

The second time they rekindled the romance, Megan, who also dated exes including Scotty T, Pete Wicks, Harry Eden, Mike Thalassitis in the past, is yet to feature Josh on her socials.