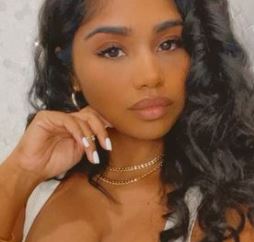 A catfight broke on Instagram when American Boxer Gervonta Davis accepted cheating on his girlfriend Vanessa Posso. After the IG story the boxer posted, things between Vanessa and Gervonta’s alleged side-chick got into a feud that was widely shared on the internet.

Now, scroll down this Vanessa Posso wiki article to learn more about Gervonta Davis’s girlfriend and the drama that she got involved in.

Vanessa Posso celebrates her birthday every year on 30 May. She turned 32 years old in May of 2020. Furthermore, she secured Gemini as her zodiac sign.

Who Are Her Parents?

Vanessa Posso was born to her anonymous parents in Columbia. However, no further information surfaced on her father and mother as of this writing. Going by her looks, Vanessa’s parents had to be very good-looking.

In fact, people who commented on her Instagram noted that she is the spitting image of her father.

Moreover, Vanessa Posso underwent multiple surgeries to enhance her body. It included breast and buttock implants which aided more to her curvy looks. After the surgery, Vanessa gained measurements of 37-26-38.

Vanessa Posso owns around $500 thousand net worth. Also, she earned herself a name as a model, designer, and of course businesswoman. She founded her own jewelry line named Its Rich Girlz. She created a collection that comprised products such as earrings, bracelets, rings, and necklaces.

When asked about why she chose jewelry, Vanessa replied that she was always an accessory junkie. Furthermore, her love of jewelry naturally dragged her into making it a passion to do it. But she admitted that passion alone was getting her nowhere. So, she took a few classes to master the craft.

With her products, Vanessa was able to attract high-profile clients such as Draya Michele, Lauren London, and Trey Songz. She successfully materialized her passion into a lucrative business and a medium to support her life.

But growing up, Vanessa wanted to become a singer which very few people know of. She used to dress up and used to perform in front of her grandma. The Colombia designer was able to make it into the list of several magazines including URBAN LUX and Vibe.

Ever since Vanessa Posso tasted fame for the first time in her life, her prominence on social media flourished with time. Until April 2021, her Instagram account gathered 701k followers where she posted 366 times. The posts were dominated by modeling gigs and pictures with her parents.

All the Vanessa Posso vs Gervonta Davis vs Ashely Burgos drama ignited when Gervonta went on his Instagram to announced cheating on Vanessa with his side chick, Ashely. He posted a story that read, “I can’t stop cheating on my girlfriend.”

Shortly after, the American boxer deleted the story but fans were quick to snap and share it on the internet. Ever since the IG story, tension grew between the boxer, his girlfriend, and his alleged side chick.

Vanessa took it even further when she wrote, “I hate my lurking skills, I be finding what I’m looking for.”

She added more writing, “including the whole family and GMA don’t play.”

In response to the jabs, Ashley Burgos dared Vanessa to meet her outside in LA. The keypad war between the two women surprised the fans. Though they ended up deleting the story, the hateful exchanges were shared widely on the internet.

So, who is the Ashley Burgos, the alleged side chic of Gervonta Davis? Well, she is the daughter of Instagram model Bernice Burgos. She runs a health and wellness company named The Miracle Fitness.

Following the cheating admission, Gervonta Davis wanted his girlfriend back. He left a comment on her Instagram post where he commented come back home with a broken heart emoji.

Vanessa Posso and Meek Mill were on and off in a relationship for quite a while. In 2017, the relationship between the rapper and his designer girlfriend surfaced. As reported, she attended Meek’s birthday party in the Caribbean in the same year. Paparazzi also caught the two in Dubai celebrating Arab Fashion Week.

When they were dating each other, Meek Mill even threw a huge yacht party for Vanessa.

However, Meek was heartbroken to know that his girlfriend had a new man in his life, American boxer Gervonta Davis. As reported, she dated the boxer behind Meek’s back.

To which, Meek started ranting on his social media.

Even before Meek, Vanessa was in a relationship from which she had a daughter named Jada Milan. She turned 10 years old while celebrating her birthday in October of 2020.

More From Us: Paul Holes Wife, Net Worth, Height, Parents