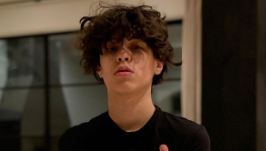 Son of Tarvis Barker, Landon Barker got introduced to show-biz very early. Starring in the MTV reality show “Meet the Barkers,” he cemented his spot as a celebrity.

Beyond reality TV fame, Landon owns a massive following on the internet. Here’s a piece chronicoling the youngster’s wiki, relationship status, and net worth!

Landon’s father Travis Barker rose to popularity as the drummer of the Punk band “Blink 182.” His mother Shanna Moakler, on the other hand, shot to fame after securing a runner up position at the 1995 Miss USA contest.

More on his family: Landon is siblings with baby sister Alabama Barker and step-sister Atiana De La Hoya. While Alabama is an aspiring singer, Atiana is a seasoned reality star.

A prominent figure on social media, Landon summons 260k followers on Instagram (as of December 2019). Through the platform, he promotes his music and takes on fashion & trends.

Fast forward to the year 2019: Landon was still single and hadn’t engaged in dating. January that year, he proclaimed singlehood by dropping a song titled “I Don’t Need Her.” In an interview with “Meaww,” the reality star cites his former girlfriends as the source of inspiration behind the record.

Suigeneris grew popular during the heyday of the so-called “Soundcloud rap.” Uploaded in 2017,...