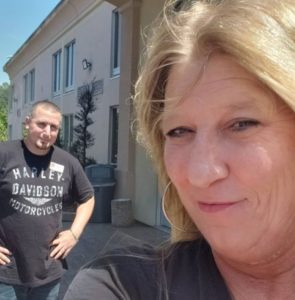 Tony is a convicted felon who earned fame after appearing in the WeTV series “Love After Lockup”.

Tony and his love interest on the show Angela would appear on a spin-off series “Life After Lockup”.

In this article, read Tony’s wiki details including his age, job, and last name. Furthermore, discover his charges, height, and more!

Per reports online, Tony from the “Love After Lockup” turned 35 years old in 2020.

Likewise, Tony grew up celebrating his birthday on the 27th of March. According to his DOB, Tony is an Aries.

If you didn’t know already, Tony stands for Anthony.

Tony’s rap sheet is long and impressive. Back in 2009, the judge found him of several charges including trafficking in a controlled substance, burglary of a firearm, and ex-felon in possession of a firearm.

For his deeds, the stated judge sentenced Tony with two ten-year terms and one five-year term in Nevada State Prison. Before the conviction, he six felony convictions.

Following his release, Tony once again faced prison time — one in Nevada and another in California.

“Love After Lock Up” sensation Tony stands no less than 5 feet 8 inches in height. Meanwhile, Tony weighed under 82 kilograms.

Many thought of his brute apperance as his distinct feature.

In 2019, Tony entered the world of Twitter. A year on, his account had almost garnered 3 thousand followers.

On Instagram, Tony enjoyed some 24 thousand followers (as of Oct 2020). Likewise, he was friends with over 4 thousand people on Facebook.

Until he began appearing on “Love After Lockup,” Tony enjoyed the life of a career-criminal.

After enjoying reality TV fame, Tony began turning his life around. From August 2019, he began working as a Restaurant Server at No Way Jose Grenada.

In March 2020, Tony landed a job as an Independent Scentsy Consultant.

Safe to assume, Tony made a handsome income which fueled his growing net worth.

For education, Tony reportedly attended the University of Nevada, Reno.

Are “Love After Lockup” Stars Tony & Angela Still Together?

Before Tony, Angela was in a loving relationship with Randy Lancaster Sr. who tragically died in an accident. Moreover, she has an adult son named Cody.

As Tony and Angela hopped from one installment to another, the trust issue between them deepened. She even caught the former felon — a self-proclaimed sex addict — cheating after finding messages on his phone. For his part, Tony denied the allegations.

Tony and Angela hinted they were now a married couple in October 2019. Later, in a September 2020 episode of “Love After Lockup,” the pair revealed they hadn’t acquired a marriage license.